Share All sharing options for: Scenes From Wednesday's Yu Darvish Circus In Peoria

No, there is not a new touring circus named after Yu Darvish. But on Wednesday, Peoria Sports Complex was the big top, and Darvish, the star pitcher and two-time Japan Pacific League MVP, was the main attraction as he made his spring training debut for the Texas Rangers against the home team San Diego Padres.

It qualified as the 25-year-old Darvish's first time ever pitching in the U.S. big leagues, and although it lasted just two innings and 37 pitches, Darvish was the closest thing to international big-time this lovely ballpark had seen in some time. So much so that Padres officials -- the ones tasked with trying to provide space for the masses in the media -- estimated that about 150 media members from Japan and the U.S. covered the game.

Guess who happened to be there for Yu-Sanity? Yours truly.

The press box was full even with extra tables. There were tables outside the press box and even five rows in a seating section in the stadium as an auxiliary area. It being a chilly day by Valley standards and a low turnout despite the presence of Darvish, there were plenty of available seats in the seating area.

Normally, not more than 20 working media members are present for a Padres spring training game. But the fans in Japan wanted to know Darvish's every move, his every pitch, everything he said about his first day -- hence, a large contingent of Japanese press. 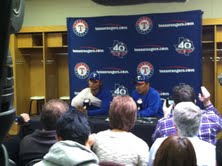 There was no room to be had in the spare locker room in which the Rangers held a news conference for Darvish (in photo at left), which took place during the game. So there was a mass exodus from the press box to the locker room in mid-game. 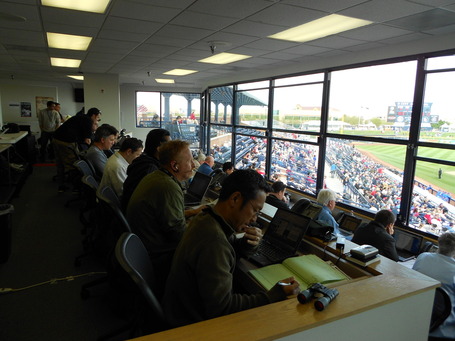 Darvish was pretty impressive, as he needed to be to satisfy Rangers fans who saw their team invest more than $100 million in him for the right to negotiate plus his $56 million, six-year contract. He threw a first-pitch strike and got the Padres' Cameron Maybin looking for a strikeout. After the O-Dog, Orlando Hudson, doubled, catcher Yorvit Torrealba came out for a word with Darvish, who struck out Carlos Quentin (another ex D-back) to end the first.

Will Venable ripped a double off the center field hitter's background that would've been a home run were it a few feet to the left, but Darvish cut down Venable by fielding a comebacker from James Darnell and starting a rundown between third and home. Then he struck out John Baker, and Darvish was done -- two innings, three Ks, two hits allowed.

Darvish spoke through a translator after his outing. 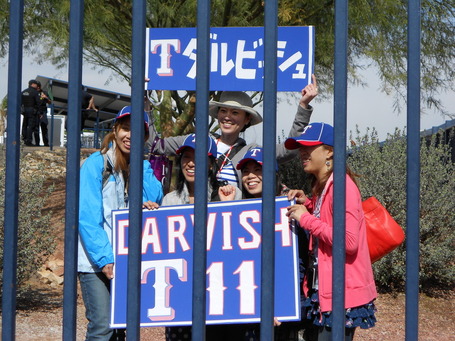 He'll get his chance.