Spring Training 2012 has arrived in the desert with the start of the Cactus League schedule for 2012. Games will be happening all over the Phoenix Metro area from Scottsdale in the east to Surprise and Goodyear in the West.

Ticket prices range from an average of $91 for a seat to see Tim Lincecum's San Francisco Giants to a low of $39 to see Ryan Braun's Milwaukee Brewers play in my hometown, Maryvale.

Here's a look at the average ticket prices from all 17 teams in the Cactus League for the 2012 Spring Training season. 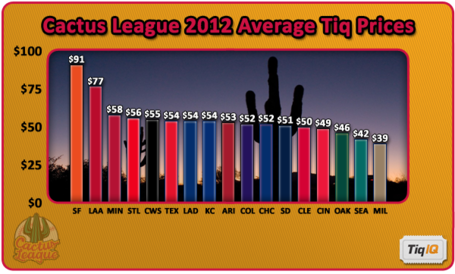 The Arizona Diamondbacks are right in the middle of the pack when it comes to ticket prices for spring training. The average cost for a seat at the sweet new Salt River Fields at Talking Stick will run you $53.

"Average price", however, doesn't mean "best price" for a ticket to see your favorite Cactus League team. Through our partner, TiqIQ, you can often find much better deals. So before you buy a ticket to a spring training game, be sure to check out the deals at TiqIQ.