Florida freshman Bradley Beal has been described as a cross between Ray Allen and Eric Gordon and he's not shy from embracing that comparison despite coming across as an extremely hard working and humble kid. The shooting guard with the long arms and big bounce has NBA scouts and fans drooling for him to join the league soon. His tremendous performance in the 2012 NCAA Tournament is only driving up his stock.

Beal is currently projected to go in the top 10 of the 2012 NBA Draft in June with a chance that he could be taken with the second overall pick. His post season play is certainly helping his cause. 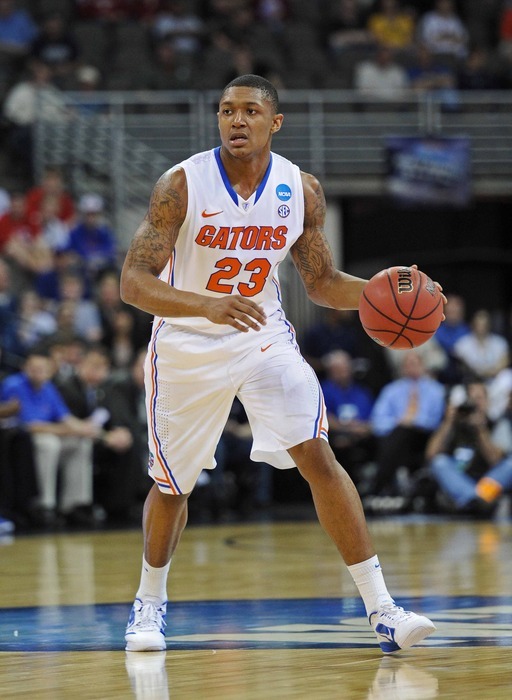 Mar 16, 2012; Omaha, NE, USA; Florida Gators guard Bradley Beal (23) brings the ball up court against the Virginia Cavaliers during the first half in the second round of the 2012 NCAA men's basketball tournament at the Century Link Center. Mandatory Credit: Peter G. Aiken-US PRESSWIRE

He said Friday that he still doesn't know if he will leave Florida as most people expect, "Right now I don't know. I'm still focusing on this season. The season's not over with. When that time comes I'm going to sit down with coach and my family and we're just going to talk about it."

NBA fans in lottery teams around the country are hoping Beal's decision leaves Gator fans saying goodbye. Beal is ready for the NBA in large part due to his maturity and excellent basketball IQ.

What stood out most watching Beal in person was how well he fit into the pro-style offense the Gators run.

Despite being the most talented player on his team, Beal is a willing passer and understands that he can impact the game in more ways than scoring. He led his team in rebounding this season with 6.7 per game and has increased that to 8.7 in the tournament.

Beal's combination of court vision, maturity and understanding the value of the team game reminds me of another NBA player familiar to fans in Phoenix, ASU's James Harden.

Like James at times, the challenge for Beal can be finding the balance between working with his teammates versus taking advantage of his abilities to dominate his defender.

Beal struck that balance perfectly in Florida's win over Marquette in the Sweet 16 game on Thursday.

When his teammates were hitting shots, he focused on setting picks, moving the ball and rebounding. When his team struggled scoring for a few minutes he put his head down and got to the rim with great success.

How does Beal know when to be more aggressive?

"When coach looks at me and just tells me to be aggressive and sometimes I know when we go a long time without scoring I take it upon myself to get something going to the basket whether it's scoring for myself or getting somebody else a shot."

I asked Beal if his ability to find that balance will translate to the next level. His answer demonstrated a fine balance between humility, confidence and understanding of the game that to me is what sets him apart.

Whether Beal finds himself as the best player on his team again or if he's partnered with other stars in a place like Cleveland (Kyrie Irving) or Washington (John Wall), he will be successful in the NBA.

As one person commented to me, Beal can play with anyone and in any style.

Beal and the Florida Gators take on Louisville Cardinals on Saturday at 1:30 p.m. local time with the winner advancing to the Final Four.

- Kansas and Duke topped Beal's list but he choose Florida based on coach Billy Donovan's unwillingness to coddle him.

"You don't want to be coming in guaranteed anything because that means you're complacent and that means you didn't have to work hard...I didn't want (Coach Donovan) to guarantee me anything. I wanted to come in and try and earn it and I think I did that."

Even if he's done growing, size won't be an issue for Beal in the NBA. His long arms (wingspan reported at 6-8) and solid frame and obvious strength should allow him to defend his position just fine at 6-4 or 6-5 or whatever he ends up being when he joins his first NBA team.

Click here for a brand new, fresh printable bracket and to follow the SB Nation StoryStream that covers the entire tournament.