Colorado Rapids forward/midfielder Tony Cascio has joined the ranks of the handful of Major League Soccer players from the state of Arizona.

Share All sharing options for: Gilbert Native Tony Cascio Off To Strong Start To Soccer Career

Local high-school football fans might remember Tony Cascio as the kicker on the 2007 5A state champion Chandler Hamilton team. Cascio was 17 years old then.

He's now a few days from turning 22, and Cascio is playing the more internationally known form of football. And playing soccer very well.

Cascio, a rookie just two games into his pro soccer career, has started both games and scored his first career goal last weekend for the Colorado Rapids of Major League Soccer. An attacking wing/forward for the Rapids, Cascio is making the most of his opportunity for more playing time just a couple of months removed from being the 14th overall pick of the MLS Superdraft.

"I didn't really know coming in what to expect. You always hear about MLS, the players being bigger faster, stronger," Cascio said this week. "I got my opportunity with the first team and I've been playing pretty good. The guys are helping me out and everything seems to be falling in place right now." 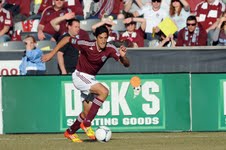 Cascio, who played in college at Connecticut, admitted being surprised to crack the starting lineup so soon. He didn't expect to be in that situation when preseason camp started.

All he really knew about the Rapids when they chose him was that they won the MLS Cup in 2010.

Rewind to the high school days, and Cascio had a nice setup with his football and soccer coaches to handle the overlapping seasons. When soccer season started, he'd practice for 20 or 30 minutes with the football team, then run off to soccer practice.

"Scottsdale Community College sent me a (recruiting) letter, but that was about it," Cascio said of his football prospects. "I was too into soccer at the time."

Cascio's brother Jason played professionally for the Seattle Sounders of the United Soccer Leagues before that club evolved into an MLS franchise.

"Pretty much everything he did I looked up to," Tony Cascio said of his older brother by four years. "He wore No. 14 in high school so I took his number. That was my number my senior year in college. We talk pretty much every day, every other day."

One year, Cascio went up north with his family to see Jason play in a game for the Sounders. The brothers and their two sisters left the Emerald City with a lasting souvenir -- matching tattoos.

"My first and only tattoo," Cascio said. "It just says 'Tough Love." It kind of reminds us of growing up. As kids we were always fighting and stuff but as we got older we just grew more and more close to each other."

Cascio would love to continue on as a starter, but he knows the Rapids have veterans at forward including longtime star Conor Casey, who is rehabbing a torn Achilles suffered last July and began practicing this week. Casey could return to the lineup in as soon as two weeks.

"Now that I'm here, I don't ever want to go back down (to the reserves) and just keep playing," Cascio said. He'd like a chance with the U.S. national team and maybe a team overseas if those opportunities arise.

"Maybe sometime later on," he said. "I like this, just staying in the United States. My parents are a state over so it's just a little plane fight away (to Denver) if they want to come watch a game or something."