NCAA Tournament Bracket Picks: Our Own 'Experts' Weigh In On Their Picks And Their Methods

Share All sharing options for: NCAA Tournament Bracket Picks: Our Own 'Experts' Weigh In On Their Picks And Their Methods

Everyone loves to make bracket picks for March Madness. Some people even do multiple brackets. But how do they come up with their picks? For everyone, there is a different way. Some go big into matchups in the NCAA Tournament. Others follow other experts and others guess. Our writing staff at SB Nation Arizona are experts in our own right and several of us share the insight into how we go about making picks that win bracket pools.

I like to start with the first-round-match-ups and then spot teams that I think are ready to make a run. Some years, there are lots of potential mid and low seeds that can go deep. I usually have at least one or two 10 seeds (or higher) through the first round and at least one of those into the Sweet 16. This year, though, I just don't feel very confident in any seed ranked below six-seed Murray State to make any noise down the stretch.

As you may have guessed by now, I anticipate lots of chalk early on in the tournament, with notable exceptions in West Virginia over Gonzaga, Harvard over Vanderbilt and Murray State over Marquette for a berth in the Sweet 16. The East region looks prime for some upsets, and I have Wisconsin stunning one-seed Syracuse while Florida State dispatches two-seed Ohio State for an intriguing Elite Eight match-up. The other three regions play out as the seeding dictates until two-seeds Missouri and Kansas take out one-seeds Michigan State and North Carolina, leaving us with a Final Four of Kentucky, Missouri, Florida State and Kansas. The Tigers and Seminoles ride their recent hot play to wins over Kentucky and Kansas, respectively, and set up a national championship between two of the hottest teams in the nation pre-tourney. After a hard-fought contest, Missouri closes the books on the 2011-12 season with a close win over Florida State and the envious title of national champs. 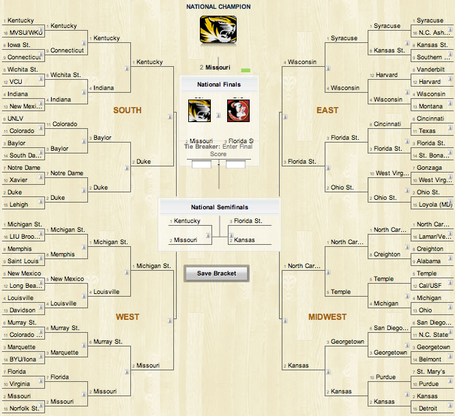 Through various bracket challenges of the past, I've discovered that the bracket I put the least thought into is the one that ultimately does the best. Now I don't know if that reflects worse on my dearth of NCAA smarts or the fact that any bracket challenge is basically a crapshoot, but by god, it's a mantra I can get behind.

So, after pouring over at least one full half of NCAA basketball and about 347 SportsCenter mini-highlights this year, my sources have led me to believe Michigan State is about to enjoy a spectacular run, capped by a tight title game win over Kansas. Florida State and Kentucky round out my Final Four, mostly because I hear Kentucky is really good, and also because I can't stand over-chalked brackets, so the Seminoles slip past Syracuse.

In a world in which the NFL, college football, NHL and Major League Baseball exist, I find it extremely difficulty to find the time or the interest to follow college basketball. Yet, such is the greatness of the tournament that I always am heavily invested in my bracket. My strategy relies on picking teams that a) have been historically good, like Michigan State and Kentucky, regardless if they are good in that given year or b) teams I may have heard an expert on sports radio mention as a darkhorse, as that usually is a Sweet Sixteen pass in my bracket. It should come as no surprise that all these years later, I'm still waiting for my first office pool victory. 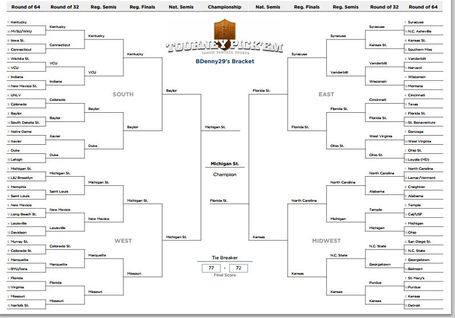 I don't pretend to be a college basketball expert. I'm a Michigan Wolverines fan so I watch every one of their games, I know the Big 10 pretty well. For the rest of the conferences I watch to see NBA prospects and even then I'm limited in my exposure till we get closer to the NBA Draft. My strategy picking a bracket has always been to identify seven or eight teams i like that aren't the teams top 2 or 3 teams I think people are going to pick to win it all. In my opinion the three most picked teams this year will be Kentucky, North Carolina and Syracuse. The group of teams I identified that I liked was Missouri, Marquette, Ohio State, Michigan State, Michigan (complete homer pick, but I do think they have the pieces to make a run) and Florida State. Of course, Missouri, Marquette and MSU all ended up in the same region, this always happens to me. Yes I think Kentucky and North Carolina are the best two teams in the country, but I'm not going to rely on getting a bunch of first round games right to win the pool if they hit. So I'm going to pick my final four and make my championship game with teams i really like, some people will have and have a champion I think will be lightly picked. My Final Four I went with was Kentucky, Missouri, Ohio State and Michigan. My championship game was Missouri against Ohio State and I have Missouri winning. This strategy used to work really well for me. Every year I usually am in the running going into the Elite 8 because I have teams no one has, but I have to be honest, I've really sucked at filling out my bracket the past 3 or 4 years. 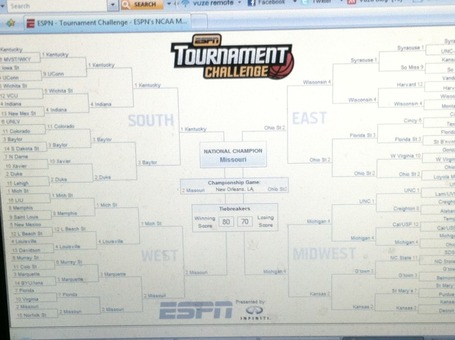 I use a strategy to make my picks that is pretty simple. I pick my champ, then the Final Four. After that, it is a method in gut feelings. I will pick always one number 12 seed to upset and I pick one team that came out of the conference tournament hot. Since I don't watch most of the basketball world outside of the Pac-12 or even Arizona State, I have Colorado riding their Pac-12 championship wave to a first round victory. The rest is going with my gut. 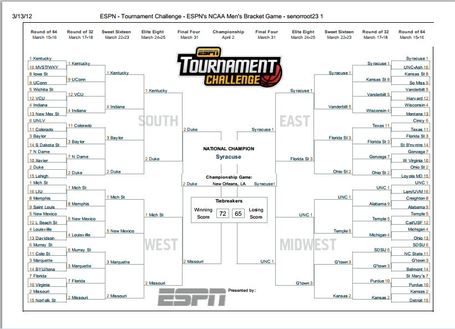