No one scored, people sang and cheered and banged on drums and toilet paper was tossed into center field. So it went Thursday night at the Reto del Sol match between the New York Red Bulls of Major League Soccer and Pumas UNAM of Mexico's Primera Division at Chase Field.

The match ended in a scoreless draw and lacked a flow at times, though there were chances to score for both teams.

But the action on the field wasn't so much the story -- one team preparing for the MLS season (New York) and the other taking time out of its regular season to play in the exhibition game, with its next game this weekend -- as was the crowd and atmosphere the 14,597 fans at the home of baseball's Diamondbacks created.

This predominantly Mexican crowd came to party and have a good time, and express themselves like a rowdy crowd at any Mexican soccer match would. Pumas fans far outnumbered Red Bulls fans and let themselves be heard whenever the Red Bulls took a goal kick or committed a foul.

"It's a pleasure to come to the United States, happy to be among Mexican countrymen here," Pumas goalkeeper Odin Patino said in Spanish. Patino played the second half for Pumas.

Red Bulls defender Rafael Marquez (singing the Mexican "himno nacional" in photo) was the biggest Mexican star on the field for either team because of his longtime service with the national team, and he called the crowd "people who get it." 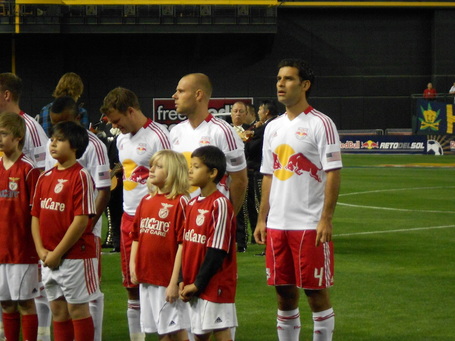 There was game, even though the most exciting action was in the seats. Shallow center field was covered with bleachers, where a group of hardcore Pumas supporters from L.A. and Las Vegas sang and chanted. At the 75-minute mark, they tossed rolls of toilet paper onto the grass, but the game continued during the cleanup.

On the opposite side of the field, fans chanted "Pumas! Pumas! and cheer D-backs mascot D. Baxter. Two men pounded on drums while another led cheers, and fans shouted a Spanish obscenity when the Red Bulls had a goal kick. 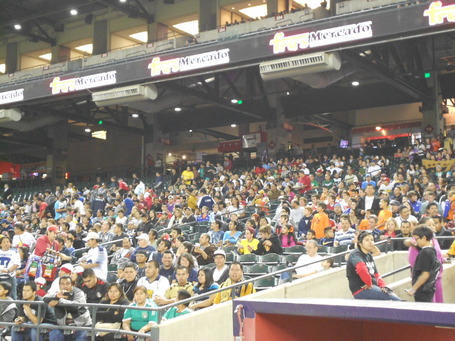 Oh yeah, and there was a game. French star Thierry Henry had his seventh-minute shot deflected by Pumas starting goalkeeper Alejandro Palacios. UNAM, short for Universidad Autonoma de Mexico, brought a roster of first-team players north though there was talk of the club's second-division team from the state of Morelos playing against New York.

Pumas got called for six offsides in the first half as it stepped up the attack. Juan Carlos Cacho and Martin Bravo missed chances or were turned away, and a cross to Eduardo Herrera went just wide in the 44th minute. Red Bulls wing Dane Richards got a look just before halftime but his shot was low and wide left.

Both teams were ever so close to scoring but couldn't find the net a couple of times in the second half. In the 89th minute, Henry passed to substitute midfielder Dax McCarty, who tried to get the ball to forward Kenny Cooper but a Pumas defender was able to clear it in front of his own goal.

When the referee blew the final whistle, fans booed and whistled in derision.

"I think the weather's perfect, good facilities, good friendly games, good quality games," Backe said. "I expected that it would be a tough (game) for us."

The Red Bulls have two weeks left to prepare for next month's MLS regular-season opener.