When you go through the opposite of winning, like losing seven in a row, it is just that much more satisfying to have a week like the team has had. Big wins. Big moments. And a team becoming a team.

For all the struggles a season can bring -- especially this season -- the Phoenix Suns (9-15) have weathered the storm to a reasonable extent.

This was a signature week early in the season as the team wrapped up back-to-back wins not only against winning teams and Western Conference rivals, but in a fashion that is indicative of the way this team needs to play to become a quality team.

The team is playing very solid team defense coming together and it shows especially at the three-point line where they stopped the deep ball (5-21) when on the season they were giving up 41.1% overall. On the season the Suns where one of the worst three-point defenders in the league, but the rotations have tightened up and the extra practice has proven fruitful.

Maintaining this play is huge as Head Coach Alvin Gentry continues to speak to sustainable play, something the team has not had all season. Is this the week the team became a team?

On the defensive end they are coming together while the offense is a work in progress as of right now without a given leader or go-to scorer. That is an element that needs to be addressed, not via hero ball and bad shots, but with a player like Dragic, Beasley, or Scola stepping to the plate to get baskets in dire situations.

In wins, the team is giving up just 93.4 PPG to opposing teams, which is reflective of this week where they gave up only 82.0 PPG to two very good teams. This season in losses the team is giving up 106.1 PPG to opponents showing, again, the importance of defense with this team. They are not going to outscore teams in this league when they are surrendering 100+ on the defensive end.

As he twisted through the lane, with seemingly nowhere to go, Goran Dragic was able to change direction for a game winning lay-up against the Grizzlies at home. The play started off with a simple pick-and-roll where Marc Gasol switched to Dragic and shadowed him to the baseline as any good defender would do, but to his surprise Dragic used his footwork to swing back to his left for the go-ahead basket.

When you go 2-0 in a week like this there is almost no low points to turn to, well, that was until The Garbageman put on his post-game uniform: 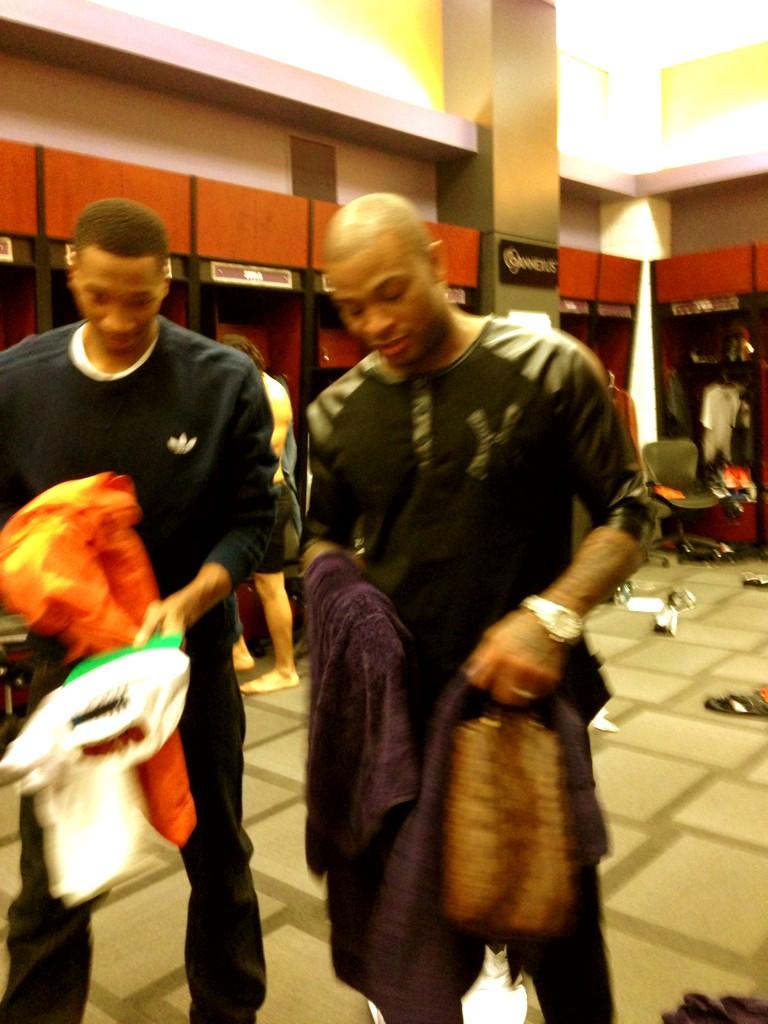 Coming off the loss to the Orlando Magic on Sunday the day off was canceled and the team got to work on both Monday and Tuesday to prep for the Grizzlies on Wednesday. Generally coming off of a back-to-back there is an automatic day off for the team to rest. Not in this case.

The practices led to another change in the line-up as Luis Scola was inserted back in as a starter.

Dragic was very limited due to illness, P.J. Tucker was nursing an injury, and Sebastian Telfair sat for precautionary purposes to avoid further injuring his leg.

A look at three different players on the Suns for the week forming a good, bad, and a surprise either way each week.

Player of the Week:

Last season it took 19 games for Dudley to get his first 20+ point game last season, this year it took 24 games and it couldn't have come at a better time. The team needed a boost and they got it from their "glue man." Dudley knows his role and is finally in the position he belongs in as the teams starting small forward playing within the offense.

For the week Dudley played well rounded basketball on both ends of the floor and is back to being the JD the team is used to.

As a starter Dudley is averaging 15.0 PPG something he only did twice in 20 games. There in lies the point about sustainability with the team. They need this type of play out of Dudley on a consistent basis to be able to play the type of defense and more importantly the offense in winning efforts.

Previewing the Week Ahead: