The Arizona Wildcats received mixed reviews when they unveiled a new red uniform against Arizona State three weeks ago. As they play in the 2012 New Mexico Bowl against Nevada on Saturday, they'll be wearing the red helmet yet again in front of a national ESPN audience.

In addition to the red tops, Arizona will wear blue jerseys and red pants. It's a decent look for the Wildcats, but not their top look, in my opinion. Here is a picture athletic director Greg Byrne tweeted out from Albuquerque this morning. 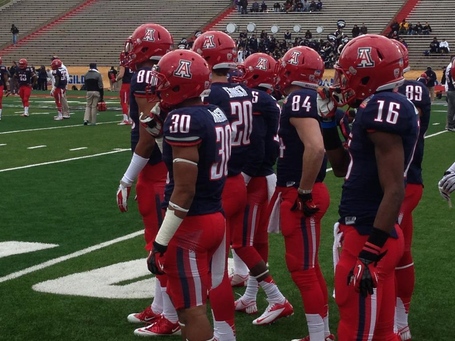 New uniform looks haven't been kind to the Wildcats in 2012. They debuted some sleek copper helmets against Oregon State back in October, and they ended up falling on a last-minute drive. Arizona also lost to ASU with their all-red look, which is never an enjoyable experience for the UA faithful.

Will the 'Cats reverse their fortunes against Nevada this time around? Kickoff is set for 11:01 a.m. MST on Saturday.