Share All sharing options for: Tim Tebow For President, Seriously!

Tim Tebow is amazing. Some of us doubted Tebow could effectively throw the ball in a big game situation. "Some of us" includes the Pittsburgh Steelers who cheated their safeties forward and got burnt. Now it's time to seriously consider taking Tebow's talents to the next level -- The Republican Presidential Primaries.

For anyone to succeed in life (or even politics), two things need to be present: opportunity and ability.

The opportunity is clearly there. The GOP primaries process has been going on for months now and the front-runner, Mitt "The Machine" Romney, can't break through the magical 25% glass ceiling. Despite plenty of chances to see his game, Republican voters aren't feeling his skills.

Then there's the rest of the field who have all spent some time at the top of the standings. There was the "grizzled vets", Newt Gingrich and Ron Paul. There was the "rookies", Herman Cain and Michelle Bachmann. And there was even some minor league call-ups, Rick Perry and Rick Santorum.

Tim Tebow brings more national name recognition than any of those guys, gals or pizza makers and he passes the most important test for winning the Republican presidential nomination -- he speaks openly and frequently about his love for Jesus Christ.

Tebow is a bit late to the primary process, having missed out on the Iowa Bowl, but with his $250,000 playoff bonus he can fund his own run. It's not like he needs millions of dollars to buy TV ads since ESPN would cover every second of his campaign.

It's a dangerous world out there. The economy stinks and countries like Iran, North Korea and Republic of the Union of Myanmar pose an existential threat to our very existence.

Only Tim Tebow can rally the troops to repel the invaders. Only Tim Tebow can inspire the job creators in this country to get off their butts and start creating those awesome jobs again like in the good ole days under G.W. Bush.

There is one small problem. The U.S. Constitution says you have to be 35-years-old to be President of the United States and according to Wikipedia, Timothy Richard "Tim" Tebow is only 24.

But then again, has anyone actually seen his birth certificate? 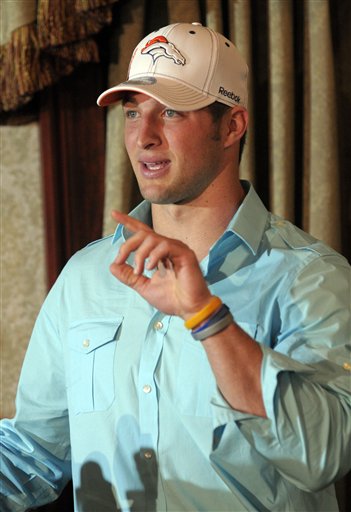