Share All sharing options for: 2012 NFL Offseason: Cardinals Set At Quarterback Despite Uncertainty

The Arizona Cardinals paid a big price to get Kevin Kolb from the Philadelphia Eagles only to see him miss half the year to injuries and play inconsistently in the early season games he did start. His back up, John Skelton, amassed a 6-2 record but was inconsistent, turnover prone and benefited heavily from the improvements on the defensive end of the ball.

That combination doesn't leave a warm feeling about the overall level of quarterback play for a Cardinals team with expectations of being a consistent playoff contender for years to come. But there were positive signs from both guys and head coach Ken Whisenhunt sounds very confident about the future of his offense.

"I've seen things this year that gives me a lot of comfort going into next year as opposed to where we where a year ago," Whisenhunt said about the depth at QB. "I'm please with where we are at that position."

And where the Cardinals are heading into the offseason is without a designated starting QB.

Kolb said he has no expectation that he will the starter when he arrives at training camp next fall and he's looking forward to the competition with Skelton. Whisenhunt likes it that way. He insists the team will play the guy that gives the team the best chance to win and encourages open competition at all spots.

Here's a quick comparison of the two quarterbacks this season with both essentially playing eight full games: 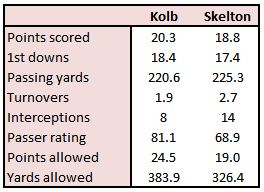 Kolb's numbers were clearly better despite mostly playing in the early part of the season before the team had time to gel. There's no telling how he would have performed over the second half, but staying on the field is an important part of the job even if the injuries were both "flukes".

Skelton, despite his struggles early in games and with picks, showed flashes of brilliance and most importantly had the ability to bounce back from mistakes and deliver in a the clutch. Winning games late is a quality Whisenhunt admires and covets in his QB.

There may not be a designated "ace" on the staff, but there's good reason for the Cardinals to be confident in their starting rotation.

Based on what we've seen and Whisenhunt's expressed confidence in his guys, it would be a surprise to see the Cardinals use a high draft pick or make a big move to get another quarterback. Skelton and Kolb are ready to compete for the job next year and whoever comes out of camp as the starter will have the support of the other. Having two options at that critical position can't be a bad problem to have.

Visit Revenge of the Birds for more Cardinals discussion.

Cardinals To Play Saints In Hall Of Fame Preseason Game