USA Soccer Vs. Venezuela: Jones Makes Most Of Suspension To Shine As U.S. Captain

Share All sharing options for: USA Soccer Vs. Venezuela: Jones Makes Most Of Suspension To Shine As U.S. Captain

GLENDALE, Ariz. -- Jermaine Jones' misfortune in Germany was the U.S. national team's gain. Oh yeah, and it worked out pretty good for him, too.

The 30-year-old midfielder, suspended by his club team, Schalke 04, for eight weeks, arrived in U.S. national team camp a week ago. He provided the game-winning assist in Saturday night's 1-0 win over Venezuela in a friendly at University of Phoenix Stadium, while wearing the captain's armband for the Yanks.

Jones was a huge difference-maker for the U.S. in the second half Saturday, his experience and fitness level showing through as he spearheaded the U.S. attack. And when it mattered most, Jones was the man taking the corner kick that found teammates Ricardo Clark's head for the winning goal in the eighth minute of second-half stoppage time.

Jones, one of the most-capped players on the U.S. team currently playing, could have eased into camp when he arrived from Germany; instead he practiced right away and is making the best of a difficult situation.

"(It's) his energy, his leadership with his vision on the field that makes such a big difference," U.S. coach Jurgen Klinsmann said. "Jermaine jumped in and talked with the guys and that's why it was an easy decision to make him the captain."

Jones had a great scoring chance early in the second half and was a difficult matchup for the Venezuelans after that, when the Americans kept up relentless offensive pressure on their opponents.

"It was a win-win for everyone. His leadership was awesome to see," Klinsmann said.

Jones said he was happy to be called in by Klinsmann, and is fine with being an older, more experienced player among a team of younger players. It's the same situation he has in Germany, where he was born to an American father and German mother.

"You can see today that everybody was running for the other guys," Jones said. "I was lucky and happy that I could be the captain." 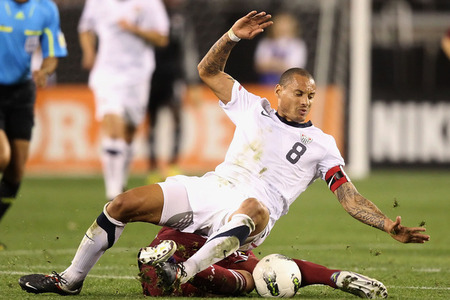 GLENDALE, AZ - JANUARY 21: Jermaine Jones #8 of USA battles for the ball with Jose Velasquez #4 of Venezuela during the first half of the friendly match at University of Phoenix Stadium on January 21, 2012 in Glendale, Arizona. USA defeated Venezuela 1-0. (Photo by Christian Petersen/Getty Images)