GLENDALE -- Arizona is sort of Martin Vasquez's second home, and the longtime coach is here this weekend as U.S. national soccer team head coach Jurgen Klinsmann's right-hand man for a friendly against Venezuela Saturday night at University of Phoenix Stadium.

Vasquez, Mexican by birth but an American citizen for more than two decades, fashioned a long professional soccer career for himself in both the Mexican First Division and in the U.S. in Major League Soccer. He played for both the Mexican and U.S. senior national teams before moving into coaching. Now he's not only a top official at Casa Grande's Grande Sports World soccer facility, directing the site's development academy for MLS club Real Salt Lake, but he is Klinsmann's first assistant coach.

Vasquez was at the stadium Friday night for a U.S. practice session.

"Right now I'm all over the place. I can call home here, I can call home there (California)," Vasquez said. "Or whenever we travel to play our games than we're on the road." 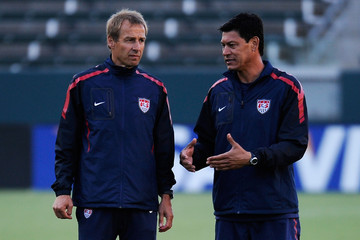 Vasquez's job at the RSL academy is to develop players for the club, one of the most successful in MLS. If not for RSL, he prepares young players for college soccer. He's got a ton of experience and has been an MLS head coach for Chivas USA.

"I've been blessed with getting opportunities and I have made the most of them," he said.

Vasquez will be at the academy later this month and next when Real Salt Lake arrives for preseason training. He wants the academy teams to follow the same philosophy as the senior team, and sees it as his job to make sure that happens.

If Arizona could attach itself to an MLS club, chances are it would be Real Salt Lake. The Utah club has an academy in the state, trains there and in the Phoenix area in the preseason and has players on the U.S. national team who are in town for Saturday's game. One is goalkeeper Nick Rimando.

"We've made this our home, I guess, for the preseason," Rimando said. "We train with multiple academy players and we've signed a couple as well. They have a chance to train with us and see if they're able to compete and play on the same field."

Those who can hang with the big-leaguers get a chance to come north to Utah to keep training with the team.

"We've got a little pipeline down here. It's a good avenue for kids to come through our system," Rimando said.