After having an incredibly successful "White Out" for Arizona basketball on a nationally televised broadcast last February, it is now UA football's turn to try something new with their fans. The plan for Saturday night's game: color-coded seating sections. The idea is simple: one section of the stadium wears red, one wears white, and the other wears blue. 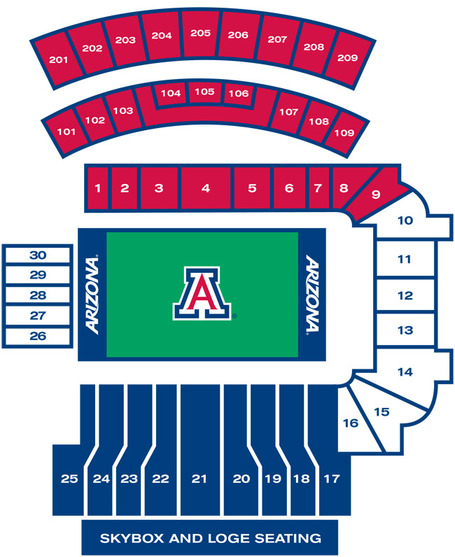 For reference, sections 1-9 is the ZonaZoo, so judge your seats accordingly. If done properly, the stadium should look pretty cool on a nationally televised ESPN broadcast and could draw the attention of both fans and recruits from all around the country.

As for the game itself, the Wildcats will come in as underdogs once again. Back-to-back blowout losses to Oklahoma State and Stanford have placed a damper on the 'Cats season, but a big win over the top-10 ranked Ducks would be a huge boost for the program.

Let's make Arizona Stadium a special place on Saturday night. Be there at 7:15.

Arizona vs. Oregon: Wildcats Battle, But Ultimately Overwhelmed By Ducks