Arizona Cardinals DeMarco Sampson: Larry Fitzgerald Not The Only Master For This Rookie

Share All sharing options for: Arizona Cardinals DeMarco Sampson: Larry Fitzgerald Not The Only Master For This Rookie

One would think that for a rookie wide receiver on the Arizona Cardinals learning from Larry Fitzgerald would be the top topic after the first five days of NFL training camp. DeMarco Sampson, seventh round pick from San Diego State, certainly was complementary of Fitz but he was also quick to point out leadership among the receivers comes from other places too.

We spoke with Sampson after Wednesday's practice. He stayed late working on some individual skills and was walking off the field carrying only his equipment unlike many other rookies who carry the gear of their veteran teammates.

"He's a good leader. He's not the typical star of the team. He's not cocky. He helps the guys out when they need it. He's there for everybody," Sampson said about Fitzgerald, but added, "(It's) not only him."

Early Doucet and Andre Roberts and have been particularly helpful to the Sampson and the other rookies on the receiving corps. That's in part due to Larry himself.

"Larry, he's so into his work a lot of the times, you don't really want to bother him. He's real detailed to his art of running routes. But Early, he's always back there helping guys out," Sampson said.

As for camp itself, Sampson said it's more of grind than he was expecting. He knew coming in that it would be a challenge but it's even harder than he thought, "Trying to stay healthy, keeping your legs fresh is the biggest thing. After a while, we do run a lot as receivers, that's probably all we do, it just takes a lot of wear and tear on your legs."

We've seen Sampson make some nice catches in practice and with his size (6-2, 204) he provides a more rugged option than some other receivers in camp. He thinks he's coming along well but admits to some mental errors. Overall, he says that he's coming along just as fast as anybody else.

Making the final roster is anything but a lock for Sampson.

With Fitzgerald and Doucet all but assured positions the team also has Max Komar, Andre Roberts and Stephen Williams back from last season. The team normally carries six receivers on the active roster but this season with the depth at the tight end position it could just be five. Sampson might have to beat-out one of the guys ahead of him to make the team out of camp.

For more on the Arizona Cardinals, visit Revenge of the Birds. 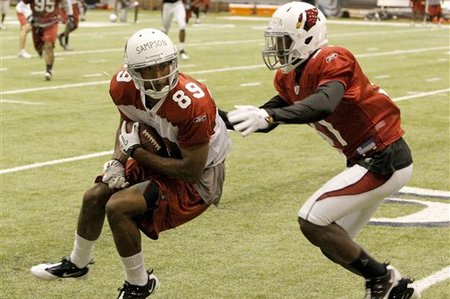