Adrian Wilson, Ready To Go: 'I'm A Top-50 Player In This League'

Share All sharing options for: Adrian Wilson, Ready To Go: 'I'm A Top-50 Player In This League'

Adrian Wilson is motivated by your negativity. He reads what's written about him being too old and that he should retire and he reads the next day when he's called "great". All that matters to the 11-year NFL veteran Arizona Cardinals safety is what goes on between the lines.

"I know what type of player I am. I know I'm a top-50 player in this league. I'll just go out there and do my thing and let my play speak," Wilson said after Cardinals morning practice on Wednesday, the fifth day of the 2011 Cardinals training camp.

Wilson's performance last season took a dip but that turned out to be due to a hip abductor injury that was much more serious than head coach Ken Whisenhunt said the team knew. The Cardinals were award he was sore and banged up but they didn't know he would require surgery in the offseason.

Adrian said that he doesn't reveal injuries and what's important is showing his teammates that he's willing to play through it.

"We're not going to talk about that. We'll see September 11th," he said when asked how he's doing now. "It doesn't really matter. I'll get it back. Trust me, don't worry about that. I'll be fine."

Wilson spent a lot of time this offseason working with the younger players on the team and helping them prepare for training camp. One guy he's very high on is fellow defensive back, Patrick Peterson.

"I think Patrick (Peterson) is pretty good," Wilson said about the third overall pick. "I love the kid, honestly. His confidence level makes me confident. He knows the playbook and he knows the things we want him to do. He doesn't talk back, which is great. He's one of those kids, you can tell, is very well rounded and he wants to be great and that's something that you always want in a kid like him."

For more on the Arizona Cardinals, visit Revenge of the Birds. 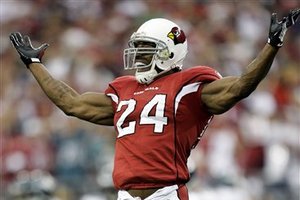