On Saturday after a short, but spirited open scrimmage for the Arizona State University Sun Devil Football Team, we spoke with one of the team's defensive stars, sophomore DE Junior Onyeali. Onyeali earned recognition as a freshman and is looking forward to another great season.

"Life is more important than money."

Words to live by, especially if the meaning of your name is those very words. Such is the case with Nduka Onyeali, Jr., a sophomore pass-rushing specialist Sun Devils and Pac-12 fans know as Junior Onyeali.

He's named for his father and is of Nigerian descent.  So does Onyeali live by his name?

"I have to," he said, right after signing every autograph and posing for every photo that time allowed despite the heat on the field of Sun Devil Stadium following ASU's football scrimmage Saturday morning. 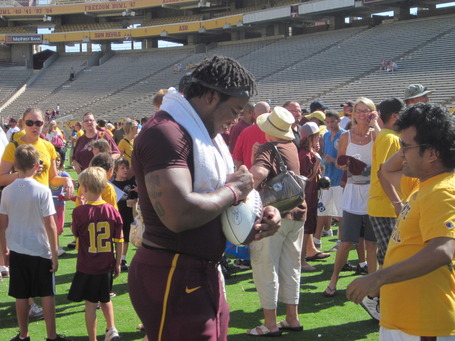 Onyeali isn't the tallest or most imposing defensive end, but he's built at 5-foot-11, 241 pounds. And his quickness helped the true sophomore record 6.5 sacks in 2010, with 11.5 of his 18 tackles going for loss. Those numbers went a long way in earning Onyeali the award for the Pac-10's Defensive Freshman of the Year.

Onyeali also forced two fumbles and recovered one, all while just a part-time starter last season. His 2011 fall campaign got off to a slow start with a pulled hamstring that has limited him in practice this month, but Onyeali says he's now 100 percent and figures to start full-time when the Sun Devils start the regular season.

That's good news for ASU, which has already lost starting linebacker Brandon Magee and is without top cornerback Omar Bolden, among various other absences on defense. The Devils need as many playmakers to join star linebacker Vontaze Burfict as possible.

Onyeali plays with a high motor that helps make up for any deficiency in size. His goals for this season? "Get a lot more pressure on the QB and get better in the run this year."

Onyeali said good coaching and his strong desire to be a starter and get a lot of playing time as a freshman were what led to his success.

"Nothing was given to me," he said.

Onyeali sees a defense that will be very stout against the run -- if it plays to its potential this season. He's got the Colorado game on Oct. 29 at home circled on his calendar, since the Buffaloes are as close to a hometown team as Onyeali has.

Onyeali is a student of the game. He watches NFL pass rushers and their sacks and tries to learn from what he observes. ASU has him switching off between the strong and weak sides in its defensive scheme.

The sack numbers won't matter as much to Onyeali if the Devils do one thing this season.

"Win a championship," he said.