Share All sharing options for: ASU Football Open Scrimmage: Lots Of Work To Do, Erickson Says

The Arizona State University Sun Devils held an open scrimmage for their fans on the main Frank Kush Football Field on Saturday morning. It was a great chance for the several thousand fans who attended to see their 2011 Sun Devil team in full pads. After the practice the fans were allowed on the field and meet the players and get autographs.

From a football standpoint, it's always going to be a mixed bag when the offense plays the defense in such a public setting. There's really no way to come out of that with winner. If the offense looks good, it means the defense was bad. If the defense steps up, you worry about the offense's ability to move the ball. In other words, don't read too much into what you see.

And yet, here's what we, and more importantly head coach Dennis Erickson, saw.

"Mixed bag. We've got a lot of work to do," Erickson said. "If we want to compete for the (Pac-12) South Championship we (need to be) better than we were today in a lot of areas."

While Erickson stresses the work that his team needs to do, he also said he wouldn't be able to fully evaluate the squad until after their first real game which comes on September 1 against UC Davis.

Erickson was pleased with the play from starting quarterback Brock Osweiler who had a few bad passes but overall was very consistent. In the battle to back up Brock, freshman Mike Bercovici got the first rep but it was fellow freshman Taylor Kelly who performed better on the day.

Erickson said earlier in the week that a decision was coming soon naming the QB2. He wasn't ready to make that call immediately following the Saturday scrimmage. He did give the edge to Kelly in this session but had also said that it will come down to much more than one scrimmage.

Overall, the offense clearly got the better of the defense on the day. They were able to move the ball effectively through the air with big passes coming from Osweiler to Kevin Ozier and George Bell.

Bercovici had a few nice completions to running back Marcus Washington and wide receiver Jarrid Bryant. Kelly connected with Ozier as well and had two nice plays to Kevin Anderson. Anderson had the play of the day with a long side line catch that was a bit under-thrown. He turned and jumped over the defender to make the grab.

Erickson called out the play of running backs R.J. Robinson and  Marcus Washington who got extra time with starter Cameron Marshall sitting out with a minor injury. The coach thought his offense ran the ball well but they certainly didn't dominate by any means.

"I'm sick and tired of seeing field goals blocked. First kick of the game and Vontaze (Burfict) runs right through and blocks it. How many games are we going to have to lose to figure that out as a football team. That's disappointing."

This quote from Erickson was the first thing he talked about after the scrimmage. Clearly, it was on his mind.

The secondary was without cornerback Alden Darby or linebacker Anthony Jones and the starters played very little overall. When the first unit was in the game they performed much better than the reserves who, for the most part, got picked apart through the air.

The linebackers did better, including Collin Parker who's now starting in place of the injured Brandon Magee who's lost for the season. Erickson was also pleased with middle linebacker Kipeli Koniseti who will be called on to spell Burfict at times.

While it was a full tackle scrimmage, that didn't apply to the quarterback. The defense did register a few called sacks, however, with William Sutton getting special praise for his pass rush.

Here's a few pictures from the day: 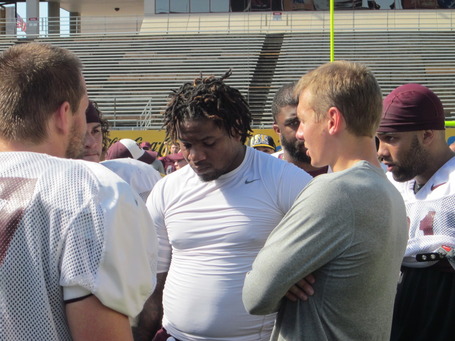 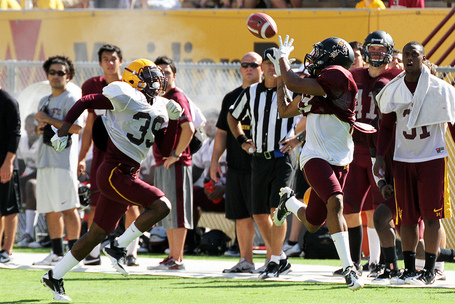 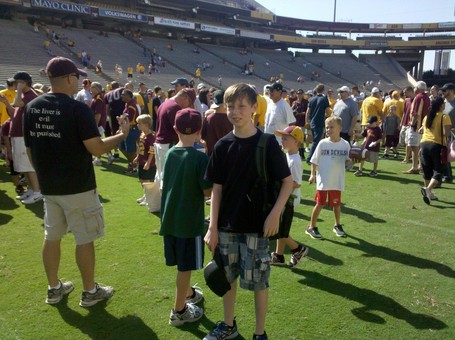