Duece Lutui Returns To Cardinals With Motivation And Great Quotes

Share All sharing options for: Duece Lutui Returns To Cardinals With Motivation And Great Quotes

Now playing the role of team punching bag, Deuce Lutui. The big guy is back in Cardinals' training camp and once again we are talking about his weight. After signing a big free agent deal with the Cincinnati Bengals, Lutui was bounced back to Arizona for failing his physical and came right back to the team that loves to love him.

Deuce, as always, had a lot to say to the media when he spoke right before lunch and in typical Deuce-fashion he lofted some great one-liners.

"Having that burden coming into this world as a 13-pound baby, it's one of the crosses I've got to carry," Deuce said.

It's not all fun and games of course, which head coach Ken Whisenhunt made perfectly clear, "There's a lot of things you see that you just shake your head at...especially when you have a close relationship with someone like Deuce and the relationship he has with his team. It hurts to see him not realize the potential that you know is there."

Whisenhunt made it clear that the Cardinals aren't going to have a lot of patience with Lutui. They are setting up a plan for him with an ultimate target weight along with interim goals. Key to the plan will be maintaining the weight once (if) he reaches it.

"Deuce and I have talked a few times --- and none of it was over a meal," Whiz said. "I'm not by any stretch angry or upset because we want Deuce to be successful. Not only selfishly for our football team but also because of the personal relationship you develop with players."

Lutui guaranteed that he has "a renewed commitment" and that he considers making weight a matter of integrity, "I'm not doing this because you're telling me, it is for my whole self, my health and everything like that."

Deuce had a message for the Bengals team that cut him as well, "Just understand what's leaving the door and I'll see you guys this Christmas." (Cardinals vs. Bengals, Week 16, Dec. 24.)

The Cardinals starting right guard from last season, however, also seemed like he almost wanted this result.

Asked how he'd respond to fans who would say they could keep the weight off with millions of dollars at stake, he gave an interesting answer, "I look at the situation over there in Cincinnati with the quarterback situation, going in there after the CBA is handled and trying to learn a whole new playbook before the season...I know I've left a lot over there but I see this as an opportunity."

That kind of sounds like a guy with regrets about leaving in the first place, or, maybe like a guy rationalizing his inability to make weight. Whichever it is, he doesn't mind the criticism, "The good Lord made me this big so I could take a lot of blows."

The bottom line, Deuce says he's motivated to not only make weight but to raise the level of his play on the field, "I'm a nasty guy and I'll take the trash out on the field." 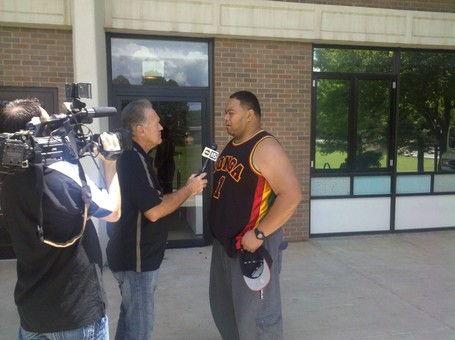 Deuce Lutui at an as of yet undetermined weight, talks with Craig Fouhy, Sports Director for ABC15 in Phoenix. August, 2, 2011. Photo via Seth Pollack's cell phone.