A project that originally started many months ago by athletic director Greg Byrne is now complete for Arizona Football. The structures have been set, the LED panels have been put in place, the new sound system has been installed and the two smaller video boards have been posted as well.

There weren't many stadiums in America that needed an upgrade more than Arizona Stadium did and now it features one of the biggest scoreboards in college football. Better yet, construction on the north end zone project is hopefully set to begin this winter.

Here is a great photo courtesy of AD Greg Byrne (@Greg_Byrne). The old video board -- which is outlined on the new one for comparisons sake -- remains standing above the north end zone, though it will be taken down once the season ends in order for construction on the new seats and luxury suites to begin. 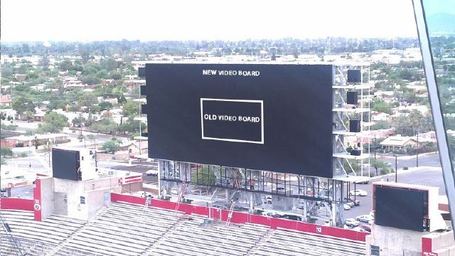 Opening kickoff is 15 days away.