OK I'm just going to come out and say it -- I want Reagan Maui'a to make the Arizona Cardinals 53-man roster. So c'mon, dude, be a juggernaut and make the coaches keep you.

My roughly three-minute conversation with Maui'a, a 6-feet, 270-pound fire hydrant of a fullback from Hawaii by way of Stockton, Calif., was pretty entertaining. Plus the guy once ran through drywall, shown in this video that went viral and earned Maui'a his nickname, "Juggernaut."

Be forewarned for the one naughty word you hear in the video:

Maui'a was cracking me up almost from the start. I told him I was going to ask him an offbeat question about his video, and he said "Offbeat?" and started beat-boxing like Doug E. Fresh.

Now that was funny.

"It was all out fun until it hit YouTube, and you know how YouTube gets," Maui'a said. "It's crazy. But yeah, people still see me and they know me as the Juggernaut running through the wall."

Maui'a has been known as Juggernaut since college.

"I didn't even think it was going to get that many hits," he said. As of Wednesday night, the video was at well over a million views. "It's fun. I'm glad people can go on there and have a good laugh. Innocent fun. I wasn't trying to show my macho(ness) or anything like that."

He was working out and got bored. So he decided to crash through a wall. 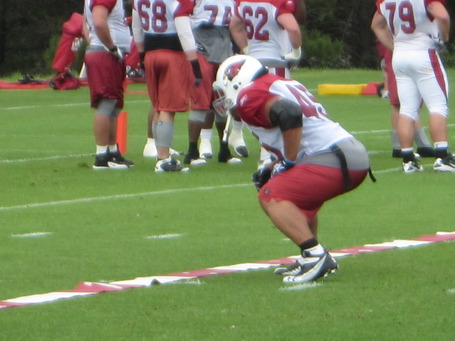 Training camp probably isn't as much fun for Maui'a, who is trying to win back the roster spot he earned last season in which he played in 15 regular-season games with four starts. He's glad to be back with the Cardinals for another opportunity.

Maui'a played in 16 games with nine starts as a rookie sixth-round pick of the Miami Dolphins in 2007 but was released before the 2008 season. He ended up in Cincinnati and played in two games before being released around midseason, and didn't play in the NFL in 2009.

"God put me here for a reason," Maui'a said of joining the Cardinals. 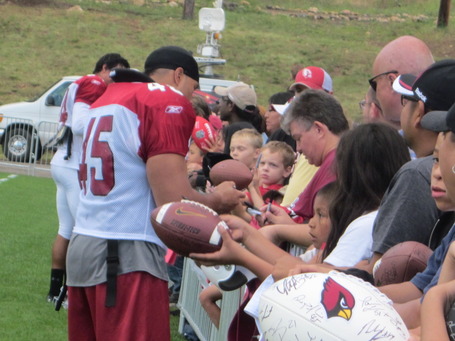 After our talk, Maui'a was walking near me as we headed off the practice fields at NAU. Amid screams of "No. 45!!!" from kids seeking autographs, I turned to see Maui'a feign a move to run over a metal barrier. He didn't, of course.