Light rain on Monday made for some muddy conditions and plenty of puddles around the NAU campus, but Cardinals practice went on outdoors, allowing a good crowd to watch and cheer and say ooh and ah.

The fans were kept out of Sunday's practice when it was moved indoors. Considering what would happen later in the afternoon, a loud thunder clap seemed to be some kind of foreshadowing although the rain somehow stayed away. 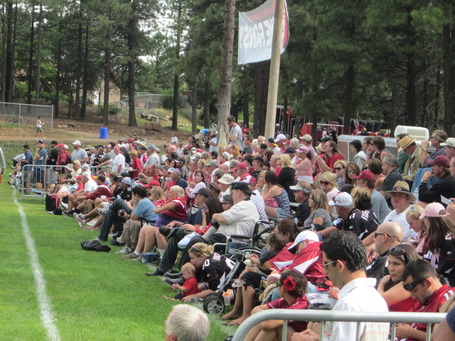 OL Deuce Lutui left with a staff member after stretching and did his early work by himself, running with weights and doing other cardio-type exercises, presumably to lose more weight.

WR Andre Roberts made a nice grab after slipping on the grass but reaching up from a sitting position for the catch.

WR DeMarco Sampson brought in a deep pass and ran it in for a touchdown, but on the very next play RB Ryan Williams dropped a short pass in the open field.

DT Darnell Dockett won a one-on-one battle with guard Rex Hadnot, sending the veteran to the grass in a heap.

Then came the real fireworks. OT Jason Speredon and DE Jeremy Navarre got into a pretty serious fight during team drills. Both grabbed each other's face masks and threw punches under them before finally being separated.

Practice ended with a two-minute drill. That's Kevin Kolb in the photo below dropping back to pass. 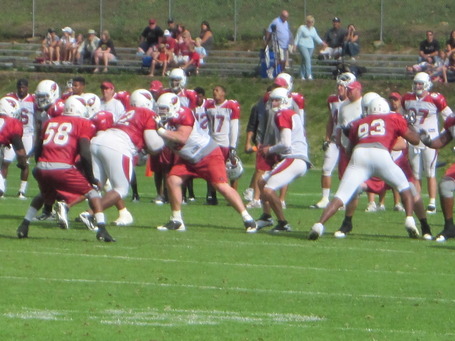 And of course, the customary rookie carrying a veteran's pads off the field. 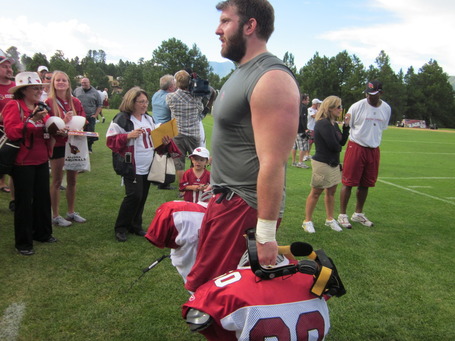