Cardinals coach Ken Whisenhunt was asked a pretty legit question about what fans can see in Ray Horton's defense that was different from defenses prior to his arrival.

Whisenhunt started the basics. "Well if we could stop somebody, that would be a good start," he said. "That's something that we've got to get better at, obviously. I don't know if on the surface you can be able to put your finger on something that would be different. The biggest issue that we had last year was we weren't on the same page as a defense. We weren't playing together."

That said, the goal is better team defense for the Cards, who finished 29th in the NFL in total defense last season. Enter Horton (below right), who is out to improve things as defensive coordinator. 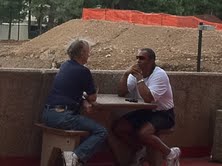 More from Whisenhunt before Monday's practice, which was in jeopardy of being moved indoors again when rain began falling around 1:30 p.m.:

-He's excited about the leadership he's getting from veteran players. But... "let's not color our judgment for last year based on a 5-11 season... When we get to the season, if we win football games, that's the only thing that matters."

-Adrian Wilson and Michael Adams are progressing in injury rehab. There is no timetable, Whisenhunt said. "There haven't been any setbacks and that's always a good sign."

-WR Max Komar is expected back to practice today.

-TE  Todd Heap's thumb is still sore. "If he'd catch the ball the first time, then maybe he wouldn't have jammed his thumb," Whisenhunt said, drawing laughs. "It's just working through the soreness."

-Asked about Darnell Dockett and his proposed singing career, Whisenhunt said he didn't know Dockett could sing. "If he says he can sing, I'll be excited to see him on 'Idol" or 'The Voice' or any of those things."