Cardinals quarterback Kevin Kolb (below) wasn't around for the 5-11 debacle that was Arizona's 2010 season, but even as a new guy, he can see a desire for returning players to atone for it. 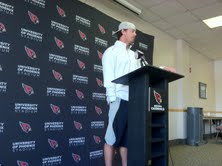 "Everybody's got that chip on their shoulder and I'm glad I'm stepping into a team that's like that, rather than a team that won 12 football games last year and they think it happens every year," Kolb said. "The intensity of this camp is better than I've been in before. The focus of all the guys day in and day out, to come off a break and to come off a game and have that practice like we had yesterday, that doesn't happen very often."

The Cardinals were pretty excited about how they practiced Sunday. Indeed it was a fast practice that didn't lack for hustle and emotion. In fact, coach Ken Whisenhunt called it one of the better practices the team has ever had in Flagstaff.

"The challenge is going to be being able to maintain that kind of intensity in practice. We got a lot done yesterday," Whisenhunt said. "You can take it for what it's worth. It was a training camp practice, whatever week we're in. But I would certainly rather have one of those practices than a bad one."

Kolb said his arm feels stronger than ever and he feels quick on his feet, perhaps product of not having offseason workouts. He wants the Cardinals to start fast and then be mentally and physically sharp enough to "steal" some games toward the middle of the season.

-On what we wants to accomplish in preseason Game 2 against Green Bay: "Just become more comfortable. Obviously we want to stick it in the end zone and when we step off the field, not only the 'ones' but at the end of the game, shoot, we still want to win."

-On his mobility: "I ran the ball quite a bit in college and the times that I've played in the NFL...Obviously it's not the best part of my game but I like to think I can get around and move if I have to."

-On fighting off the urge to throw to Larry Fitzgerald so much: "It's tough. Obviously with the plays he makes, you want to give him a shot all the time and he wants a shot all the time. But we've got playmakers all around the field and I think that people will be shocked at the way these young guys will step and play and make some big plays for us."