It's A Trip Being Back At NFL Training Camp Again

Share All sharing options for: It's A Trip Being Back At NFL Training Camp Again

The last time I covered an NFL training camp was in the summer of 2008 with the Seattle Seahawks on the banks of Lake Washington in Renton, Wash.

It took three years to come back to it again.

I'm only in Flagstaff  with the Cardinals at NAU for today, but it's just like old times. Eating with the other media members in the dining hall on the NAU campus. Trying to get as many post-practice interview as I can. Watching from the sidelines and trying to avoid crashing football players. 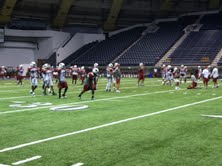 Strange how similar this camp is to when I covered the Seahawks. You drive through a forest of pine trees just before arriving at the final destination. Just south of Flagstaff and just west of Eastern Washington U. in Cheney, Wash., where Seattle trained up until 2006.

Another college campus in the Big Sky Conference. Mountains nearby. Immaculate practice fields and fans coming out to watch. Except the Seahawks didn't have an indoor facility in Cheney but they have one now in Renton.

It's good to be back. But I'm glad I don't have to do it every single day.