Share All sharing options for: Dustin Pedroia No. 12 Sun Devil To Make Cover Of Sports Illustrated

Dustin Pedroia is known for a lot of things. Whether it was his stellar career as an Arizona State Sun Devil, All-Star caliber play with the Boston Red Sox or wild, unkept neck beard, he has now added one more feat to his resume: an appearance on the front cover of Sports Illustrated, making him the twelfth Sun Devil to do so.

According to Jeff Metcalfe, Pedroia will join Barry Bonds -- who made the cover an astounding ten times -- Reggie Jackson, Phil Mickelson, Pat Tillman, John Jefferson, Bruce Hardy, Jake Plummer, Bump Willis, Danny White, and James Harden as the other Arizona State athletes to be featured on the front cover.

Pedroia, now the starting second baseman with the Red Sox, was an excellent shortstop for the Devils from 2002-2004. He was a Golden Spikes finalist, which is an award that goes to the best player in college baseball, and received multiple awards, including two for being the national defensive player of the year. Hit .393 (96-for-244) in 2004 with 24 doubles, nine home runs, 48 RBI and a .502 on-base percentage.

ASU made a run in the NCAA tournament in his junior season before eventually being eliminated in the semifinals. He was selected in the second round of the 2004 draft with the 65th overall pick.

A picture of the cover after the jump... 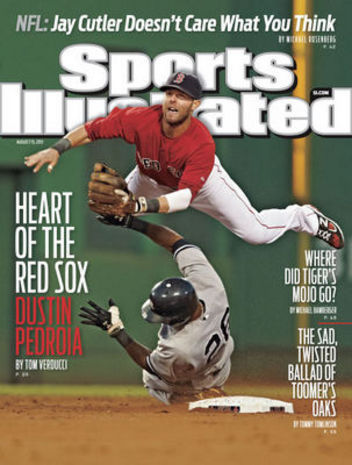