Share All sharing options for: Arizona Cardinals Playing In Front Of Very Small Crowd In Oakland To Start

Just minutes before kickoff of the preseason game between the Arizona Cardinals and Oakland Raiders, it looks like An Arizona Diamondbacks game facing the Houston Astros. Most have been figuring that attendance would be huge considering the crowds teams have had in training camps because of the loss of football in the offseason.

I guess in California the preseason is no big deal. Kent Somers of the Arizona Republic tweeted a photo of the stadium, where it looked like, in the words of Somers, "a JV game." 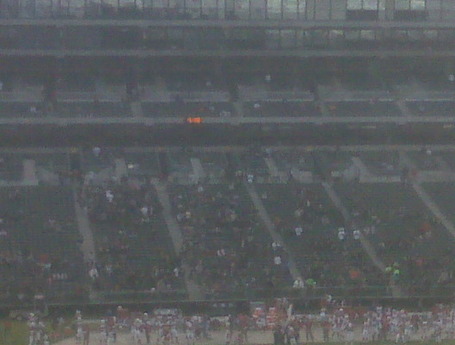 Usually against the Raiders you face a much larger, more rabid crowd. However, it is a weekday evening. For other sports, California fans are notoriously late.

The game is on. It will be the smallest crowd the Cardinals see. After all, they had 13,000 faithful in Flagstaff for a scrimmage.