He doesn't say much, but he certainly does quite a bit.

That's Jamal Miles, a junior wide receiver for Arizona State. Or so says his listed position. Miles is coach Dennis Erickson's and offensive coordinator Noel Mazzone's jack-of-all-trades, a multi-purpose player who plays in the slot at receiver, returns punts and kicks has been used as a ball carrier.

Miles is slated to be a big part of what ASU does on offense this season, and now he could get even more touches through at least the first two games of the season after receiver J.J. Holliday suffered a broken collarbone and will miss a month, the Arizona Republic reported Wednesday night.

"The next step for me is just playing a bigger role, playing a little bit more running back and wide receiver, now that I got a starting (WR) position," said Miles, who rushed for 85 yards and two scores and caught 25 passes for 203 yards and four TDs in 2010. Miles also returned three kickoffs, one for a 99-yard touchdown against UCLA.

"As long as I can be on the field and be out there, whatever they want me to do, I'll do it." 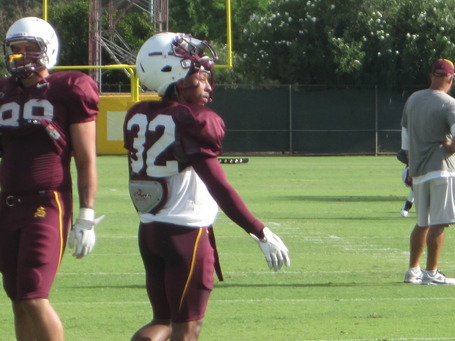 Miles (No. 32 above)  came to ASU from nearby Peoria as a running back, but was soon moved to receiver. He has yet to use his redshirt season.

In 2011, Miles will be part of a unit that features a number of potential playmakers. There's featured running back Cameron Marshall, who will get the brunt of the carries. There's receivers Mike Willie, Gerell Robinson, Aaron Pflugrad and another back, Deantre Lewis, who has yet to practice in camp as he recovers from injury.

"We've got a lot of weapons out there," Miles said, "so it's not like there's just one person that they (opponents) have to worry about. Basically, it's the whole offense."

Miles was fine with sharing touches with Marshall and Lewis and the receivers last season. One of those receivers was cousin T.J. Simpson, who helped Miles choose ASU. Unfortunately, Simpson isn't expected to play this season with a torn ACL.

"Just go out there and do my best and fill his spot, do what he's supposed to do," Miles said of Simpson. "He's one of our top players and he was going to play a big role this year."

Miles, a Pac-10 honorable mention performer last season, is on the watch list for the annual Paul Hornung Award, given to the top all-purpose player in major college football. The list includes 50 candidates from around the country.

It's a new season for Miles, which includes a new look for the Devils. Miles digs the new uniforms and helmets.

"It's something new," he said. "We don't have to wear the same thing over and over."The black jerseys, which will debut next month, are most popular among his teammates, he said.

Miles just wants to be a contributor this season and hopes that leads to a title or two for his team.

"We have high expectations for ourselves," he said of the Sun Devils.