The pads were cracking, bodies were flying and players were limping out of the pile Wednesday morning in the longest period of full-contact practice to date for Arizona State football. 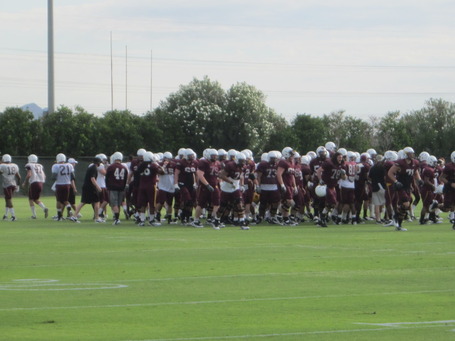 The roughly two-hour practice went by pretty quickly. ASU has a lot of returning players on both sides of the ball so being at practice this year is a lot like being at practice last season, with a couple of notable exceptions:

1. QB Brock Osweiler, firmly in charge as the No. 1 guy, is a rah-rah guy who is upbeat for every new drill, every new series in team drills. Before those started Wednesday morning, he was hopping around high-fiving anyone he could.

3. Right now the backup QB looks to be freshman Mike Bercovici but Taylor Kelly, a redshirt freshman, is close in competition.

4. The new face at DE is sophomore Davon Coleman, until Junior Onyeali is at full strength. Onyeali did get a series with the first team defense Wednesday.

5. ASU coaches are taking a long look at sophomore WR Chris Coyle, who is a big target at 6-3, 227 pounds. Coyle was used mainly on special teams last season.

6. CB Omar Bolden is rehabbing his torn ACL with enthusiam. It makes one think he could be back at some point this year. Bolden was moving pretty well in rehab; it's been four months since the injury.

Now let's move on to the hitting.

The No. 1 linebackers are all back and it seemed like they couldn't wait for this day. Rap music got the defense fired up and it set the tone as scrimmaging began.

DE Jamaar Jarrett stopped RB Cameron Marshall for a loss with a big hit, and LB Brandon Magee wrestled down a receiver for a short gain. Then DT Corey Adams overpowered his blocker and would have had a sack.

Magee and Vontaze Burfict were especially physical, not surprisingly. Magee drilled J.J. Holliday after a catch and Jarrett dropped Marshall again for a loss. Burfict dropped a would-be interception over the middle.

As scrimmaging went on, however, the offense began to make plays. Marshall had a long run off left tackle, Osweiler completed a play action pass to Aaron Pflugrad for a long touchdown and connected with Gerell Robinson, who'd limped after trying to block near a pile earlier, for a deep pass just before LB Shelley Lyons limped off the field.

"First couple of series, our No. 1 defense pretty much dominated it," coach Dennis Erickson said. "Then the offense came back and made some big plays, which obviously we're capable of doing offensively. The consistency on offense wasn't there like I'd hoped but again, that's the first time we went 40 plays (full contact). We'll know a heck of a lot more Saturday when we go for a long period of time."