Share All sharing options for: SB Nation Arizona Pulls Back The Curtain On FanFest - A Day Early

Baseball's All-Star Week (or rather few days) is almost here, and the first major event of the weekend officially opens Friday morning.

There's a ribbon-cutting ceremony at the Phoenix Convention Center at 8:40 a.m. to welcome fans to MLB All-Star FanFest.

The doors will be opened for all with tickets to enjoy the various exhibits and interactive attractions. If you go, you'll see what we're talking about, but why not get a first look at some of the things there are to see and do?

SB Nation Arizona -- in this case, I -- was among those media members who got a "hard hat" tour of FanFest as the finishing touches on setup were being put on Thursday. For starters, the "hard-hats" were batting helmets from the 70s and 80s with a FanFest logo on the front. Put a lower-case "P" on the front and give me a few more pounds, and I could've passed for Greg Luzinski. OK maybe not. 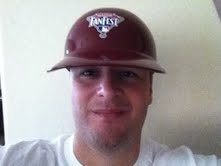 I didn't realize how huge the convention center is, and the expanse of square footage used for FanFest is immense. It's 350,000 square feet.

One of the first things you might see when walking in is the World's Largest Baseball. It's 12 feet in diameter. Enjoy my photos.... 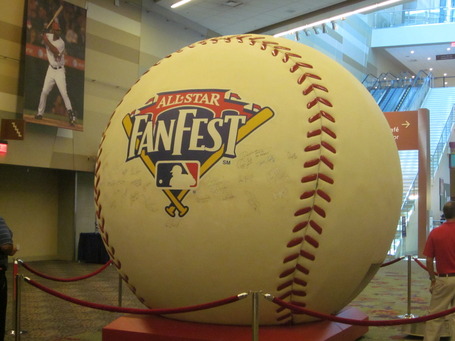 First thing I saw when I walked in was the souvenir shop. Everything All-Star Game is there, even hand puppets of players like Derek Jeter, Albert Pujols, Roy Halladay and Tim Lincecum. Get your Freak on!

The center of the site is home to The Diamond, where players, managers and experts will hold daily clinics and make appearances. Like most stuff at FanFest, it's great for the kids to hit squishy balls, run the bases and get tired. The diamond is 10,500 square feet of green and dirt-colored carpet and lines. 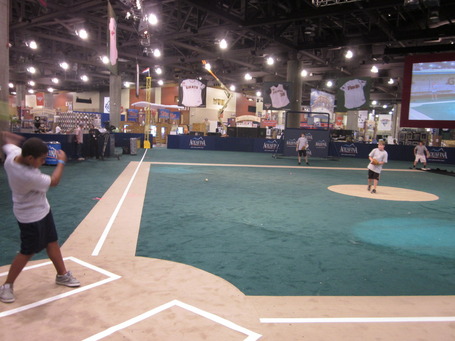 There's a cool Negro Leagues exhibit, a place to get autographs from legends, an exhibit with artifacts from the Baseball Hall of Fame in Cooperstown, N.Y., a "Hometown Heroes" area that celebrates all things Diamondbacks since their inception, and 288 minor-league team caps on a wall. Somewhere I have an Everett (Wash.) Aquasox cap. 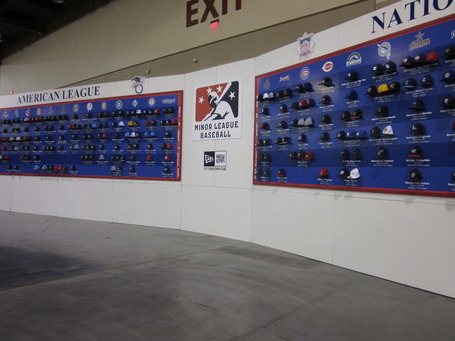 For me, the Hispanic Heritage tribute exhibit was a must-see, as well as the World Baseball Classic tribute. And one the best things at FanFest is the chance to get a personalized baseball trading card for free. Organizers expect to give out more than 18,000 of those. Or you can make like you're catching a ball up against the wall.

There are big screens everywhere, and another big showcase area - the batting cages. That's where former D-backs star Luis Gonzalez was for a little while, watching some kids swing away at squishy balls being pitched to them. 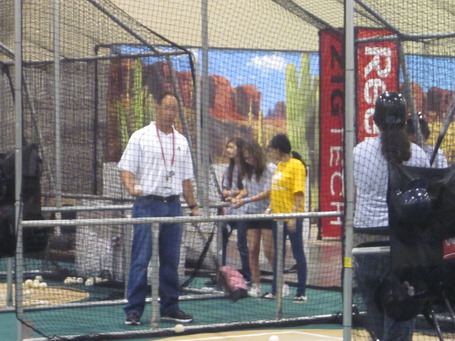 The way I understood it is that beginning Saturday, kids can compete to win a FanFest home run derby, a video game tournament and a skills challenge at the Under Armour Baseball Combine, which tests speed and agility, with the prize being tickets to the All-Star Game. 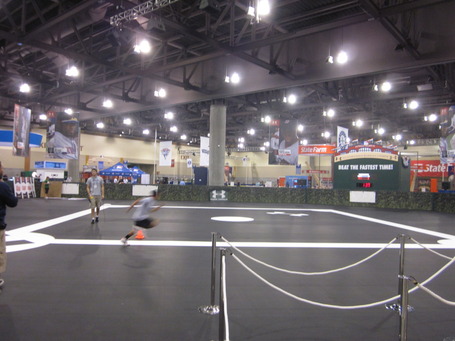 Gonzalez said his most favorite part of FanFest will be seeing the excitement from kids. Gonzalez will be managing in the Futures Game Sunday. He's handling the World Team with Mike Piazza guiding Team USA.

"This is a chance for us to showcase our state, to showcase this city and see how special we are. We know it's going to be hot. But we've prepared well enough," Gonzalez, who is serving as the All-Star Summer Ambassador, said. "We have a lot of water stations, we've made a lot of shade stations for the fans, we have an air-conditioned building for FanFest."

Gonzalez is honored that MLB chose him as an ambassador. "I take a lot of pride in it," he said.

"This is a special event, and you don't get it in your city too often."

Derrick Hall, the D-backs president and CEO, did a lot of interviews Thursday. He said he's bringing his three kids Saturday, but that FanFest is for everyone.

"Our fans are going to be blown away when they come here," he said.

So will the D-backs be active in the trade market, seeing as they're in contention for a division title?