The LA Sparks and Phoenix Mercury have a nice rivalry that goes back many years in WNBA history. Another chapter was written on Tuesday night as the two teams waged a physical war on the US Airways Center court. The initial confrontation came late in the third quarter of a close game and sparked a Mercury explosion resulting in a 101-82 victory for the home team.

The fireworks started with about 2:55 left in the third quarter with Phoenix up 65-63 after trailing by as much as 10 points earlier in the game. It began with a hard elbow from Sparks guard Kristi Toliver as she used her off arm to clear space while driving with the ball. The swinging elbow connected with the side of Mercury point guard Ketia Swanier's face and sent her crashing to the deck. Swanier had to be helped off the floor and it was reported that she had bleeding from her eye. No further update on her condition is available at this time.

Toliver was assessed a flagrant one foul and Sparks assistant coach Jelly Bean Bryant (father of Laker's guard Kobe Bryant) received a technical foul for arguing the call. It's not clear what sparked the incident, but the LA players were making no excuses after the game.

"We didn't rebound from the flagrant foul and all the technicals that we got," Ebony Hoffman said, "I think we weren't tough mentally today and that's sad to say with as many veterans as we have on this team to not be so tough mentally, it's kind of inexcusable and I'm speechless on our effort today."

The Mercury ran off a 14-2 spurt to close the quarter and never looked back.

Diana Taurasi didn't put the entire turnaround on the incident. "I think a little bit before that (Ketia Swanier injury) we started playing a little bit better, we got some stops. When Ketia (Swanier) went down, obviously things got a little out of control for a minute, but we found a way to stay with it. When something like that happens it can affect you in a way where it takes all your energy away or it can get you going a little bit, and I think it did that for us today."

Candice Dupree and Diana Taurasi led the Mercury with 20 points each and recorded her 300th career three-point field goal. She finished 3-of-4 (.750) from long range for 16 points.

The Mercury  head to Tulsa for a road game against the 1-9 Shock on Friday. The Mercury improve to 6-4 on the season and 5-1 since their slow start to the season. 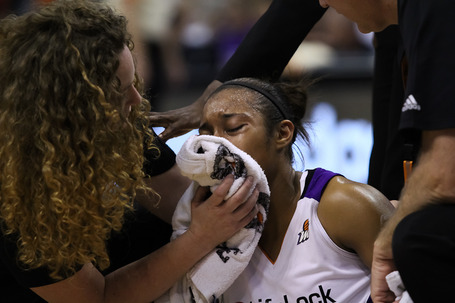