Share All sharing options for: College Football Is Back Too, ASU Sun Devils Camp Starts Aug. 2

It's the wildest time in sports these days, across the country and right here in Arizona, and joining the fun is Dennis Erickson's ASU Sun Devil football team.

The NFL free agency frenzy is under way and teams are reporting to training camps as soon as Wednesday, and in Arizona, the Cardinals are close to getting their next quarterback. The major-league baseball trade deadline is fast approaching and yes, the Arizona Diamondbacks, as competitors for the postseason, will make news whether they make a move or stand pat.

The Pac-12 Conference, too, is getting attention. After Football Media Day No. 1 in L.A. on Tuesday, Commissioner Larry Scott's blitz moved all the way to New York and the ESPN studios of Bristol, Conn., for the second phase.

That's where Arizona State coach Dennis Erickson flashed this bad boy from his earlier days in college coaching, saying on SportsCenter: "We're going to get one of these at Arizona State." 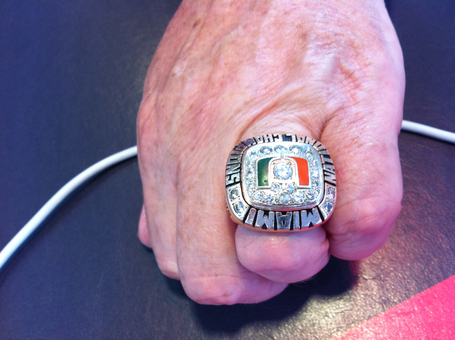 Well, you gotta love Erickson's confidence on the one hand. And it's not like he said "this year." Really, the comment was open-ended. But Erickson probably has one season -- this one -- to field a winning team, or perhaps be jettisoned from Tempe.

That said, Erickson must really feel good about what he has. The media kinda digs the Diablos, too, voting them second place in the Pac-12 South behind the University of Sanction Collectors, USC. And since USC is not eligible for a postseason game because of those NCAA sanctions, should the Devils take second in the division, they're off to play for the conference title.

See what Erickson had to say about that here. Of course, the Devils could bypass the backing-in route and just win the six-team division, which it has the talent to do. All of that without the NCAA investigations or players popping up on TMZ.

ASU hosts the Trojans on Sept. 24 on ESPN.

Before looking too far ahead, Arizona State has preseason camp to kick things off. It starts Aug. 2 at the Dickey Dome. The team will practice daily except for three days off and two days for scrimmages Aug. 13 and 20. The season opener is Sept. 1 against UC-Davis at home, when the Devils (winners of their last eight openers) will debut their new uniforms.

ASU (6-6 overall, 4-5 in conference) ended the 2010 season on a high note with a wild win at Arizona. With so much underclassman talent back from last season, hopes and expectations are high for more wins in 2011.

Eleven players with starting experience are back on offense and nine on defense. The offense is led by 6-8 quarterback Brock Osweiler, running back Cameron Marshall and receivers Mike Willie, Gerell Robinson and Aaron Pflugrad, plus an offensive line that goes nine deep with game experience and all-purpose player Jamal Mies.

Defensively, Vontaze Burfict is back at linebacker (and hopefully has his penchant for unsportsmanlike conduct penalties in check), plus co-starters Shelly Lyons and Brandon Magee. Defensive end Junior Onyeali is back after a Pac-10 Freshman of the Year campaign with 6.5 sacks.

The Devils could have some questions in the secondary, with cornerback Omar Bolden's return this season due to a torn ACL in doubt and in the kicking game, where Thomas Weber is headed to an NFL training camp.

There's no doubt the team has plenty of playmakers, more than just the ones listed above.  The offense should be electric with a good balance between the running and passing game; the defense will be challenged to hold up its end.