The U.S. Women's National Soccer Team captured the hearts of the American sporting public with their fantastic run through the 2011 Women's World Cup in Germany. But, of course, this team and these athletes didn't just appear from scratch. They've been playing the beautiful game for a long time and that includes former ASU Sun Devil star defender Amy LePeilbet who honed her craft in Tempe from 2003-05.

LePeilbet, who is from Crystal Lake, IL and plays pro ball for the Boston Breakers of the WPS, started all six games for the USWNT in the 2011 World Cup and played 533 of a possible 600 minutes. She provided a steady presence on the back line and marked up against many of the best forwards in the world.

Amy spoke with us via phone and answer questions about that fateful final game against Japan, the state of play in women's soccer and her future plans.

What happened in that final game against Japan?

"I think our team, we played a great match. We're really proud of the soccer we played in that game. We displayed what our team's about and what soccer level we can play at.

"The first goal, they got a good cross in which I felt we did a good job to block that first touch. But you know, it just took a bad hop and ended up in the six-yard box and they jumped on it and put it away. That's a little unlucky but that's soccer for you.

"Sometimes you're just caught in a tough spot and your clearance isn't maybe as good as you'd like it to be and then it didn't get out and they happened to jump on that and were able to finish it.

"The second goal they just made such a precise cornerkick. Aya Miyama put it right on Sawa's foot and Sawa did an incredible job just to flick that right into the net. There's not much you can do when they hit it with such precision. I felt we marked up really well, we were tight there, but it went right to her foot and she did great job with it to put it in the back of the net."

After the late goal to tie the game against Brazil it seemed all the momentum went to the U.S. side going into penalty kicks. Did the opposite happen after Japan scored to tie the game in extra time?

"It was tough that second goal. It hurt because we all thought when Abby (Wambach) scored in extra time that, 'OK we have this.' So that second goal definitely hurt but I think we responded well to it and I think we created a chance or two after that. Alex Morgan got down across the box so I really felt like we thought we could get another goal so I think we started to swing the momentum back our way even though it ended in that 2-2 tie.

"We go into PKs and everyone's confident. And sometimes, they just don't go your way. It wasn't our day."

With time now to reflect on the outcome, how are you and your teammates feeling about your World Cup Final performance?

"I think it was one of our best games overall in the tournament. I thought we played great soccer, we were really proud of that.

"Coming home we were definitely disappointed. We went into that tournament wanting to win and coming in second was tough for us. Now, once we arrived home, everyone's been unbelievably supportive and sharing how proud of us they are. That's been really helpful for us in reflecting on what we did in the tournament, kind of taking that step back and recognizing that we really achieved a lot. We did a great job while we were over there. We really can't regret anything, we can only be proud of the tournament that we played."

Japan was a sentimental favorite for many in the final, did that effect how you played against them?

"All we thought about and prepared for was to win. That's what we wanted to do. Up until that time, myself watching the games, I thought Japan was playing wonderful. They were an inspired team. I was excited for them. But when we knew we were going to face them, the focus was on winning. That's what we were preparing for.

"We wanted to win the World Championship even though it was Japan. They've had so much heartache, you care so much about their country and you know how inspiring (their team) is to their country but when you step on the field your goal is to win that championship."

How would you describe the level of play in this tournament?

"I think just the overall level of every team has raised. I think that was one of the great things about this tournament that made it so exciting was every game was challenge. There weren't any blowout games. Anyone you faced you had to completely prepare and be ready for them to come at you."

Is your goal to be a starter for the Olympic team in 2012?

"I definitely have a goal set to make that roster. I think that's the first step. I can't focus on if I'm going to start or not. My number one goal needs to be making that team first. If I'm a starter, wonderful. If I'm on the bench, that's wonderful too. I would just be proud to be on that team."

Will we see you back in Arizona or is your time here over?

"I get back every once in awhile. I trained back there this past winter actually. I probably won't be living there ever again but I love Arizona. It definitely has a place in my heart from my time there. I always love coming back to Phoenix." 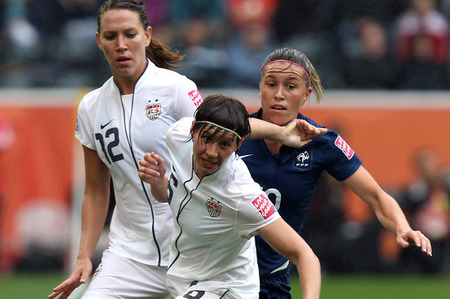 MOENCHENGLADBACH, GERMANY - JULY 13: Camille Abily (R) of France and Amy Lepeilbet (#6) of USA battle for the ball during the FIFA Women's World Cup 2011 Semi Final match between France and USA at Borussia-Park on July 13, 2011 in Moenchengladbach, Germany. (Photo by Martin Rose/Getty Images)