Coming Up In The Fight Game: Local Boxers Get Their Chance To Shine

Share All sharing options for: Coming Up In The Fight Game: Local Boxers Get Their Chance To Shine

The nickname, more associated with a 1950s TV show then a boxer, came from another fighter during another training session, when young kids who train as boxers every day talk about and come up with these type of things.

Ever since age 15, Alexis Santiago, now 20, has been known as "Beaver' to his friends and fans, even classmates, teachers and coaches when he was in school.

"The people I'm always around, we're always clowning," Santiago said. "So we know if we clown, we gotta take it. It didn't bother me at all. I got used to it."

His nickname came from his father, who whenever he sought to encourage his son in sports or before fights would shout "Milo Time! It's Milo Time!" 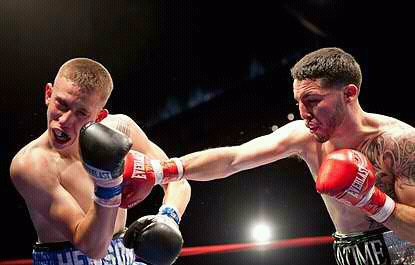 "I was actually No. 5 in my graduating class," Colon-Garcia, who went to Laveen Cesar Chavez High, said. "I love cooking. I did it for four years in high school."

The two super bantamweight fighters and friends are headlining co-main events Friday night  (July 22) at the Madison Event Center in Phoenix, another fight card put together by local promoter Michelle Rosado as her mission to bring back big-time boxing to Phoenix continues.

The nine-fight lineup starts at 7:30 p.m. with tickets on sale for $50 ringside and $30 general admission at www.facetofaceevents.net or any Pizza Patron location.

It's Colon-Garcia against Miguel Armendarez in a four-round contest, followed by Santiago versus an opponent yet to be determined for six rounds.

When last the Valley of the Sun saw Santiago and Colon-Garcia, they were part of the card that featured rising star Jose Benavidez Jr. at Wildhorse Pass Casino last month. Colon-Garcia scored a unanimous decision win over Eric Henson, and Santiago fought off a challenge from Carlos Luque for a six-round unanimous decision victory. Since then, Santiago took a fight against undefeated Randy Caballero in Indio, Calif., for the vacant WBC Youth Intercontinental super bantamweight title earlier this month and lost his first eight-round bout but went the distance.

The loss bothered Santiago for a little bit. He said Caballero ducked him before and his camp tried to use Santiago's words as bulletin-board material to build pre-fight hype.

Santiago and Colon-Garcia are young guys just trying to make a name for themselves, a pair of fighters who train seven days a week that are trying to find their place in the annals of Phoenix boxing. Former Olympian and world champion Michael Carbajal is at the top of the list, with Jesus "El Martillo" Gonzales and Benavidez the current and most prominent Phoenicians in the sport.

The two hope to become world champions and get big-money deals with big-name promoters, but are still paying their dues.

"It's the only thing I'm good at," Santiago said of boxing. "I don't like school. I was going to class and falling asleep."

Santiago -- who started boxing at age 14 mostly to stay out of trouble -- and Colon-Garcia -- a former youth football player inspired as a grade-schooler by an Oscar de la Hoya fight -- have built their own followings. They were big hits among the crowd at Wildhorse Pass and appreciate the love.

"We still remember where we come from," Colon-Garcia said.

The two are almost as much showmen as they are pugilists. They have to be. Boxing is entertainment, and Colon-Garcia and Santiago like to put on a show.

Colon-Garcia has his own pre-fight, Michael Buffer-style introduction. Santiago, who once trained in Mexico City at the nation's Olympic training center, has gone so far as to walk to the ring with an entire band of Mexican musicians in accompaniment. That's him getting ready to do so in the photo below. 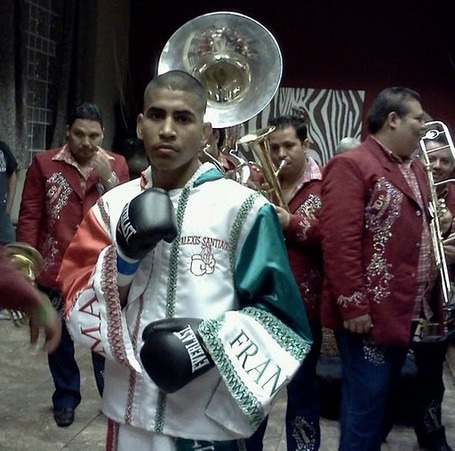