Jake Shields "Doesn't Even Know" Who Ellenberger Is; Could Be Heading Down A Dangerous Path

Share All sharing options for: Jake Shields "Doesn't Even Know" Who Ellenberger Is; Could Be Heading Down A Dangerous Path

Trash talk really isn't that big of a deal in the fight game. Most of it is just to hype an event and make the competitors -- and the organization -- more money. So no one batted an eye when UFC welterweight prospect Jake Ellenberger continually chided his upcoming UFC Fight Night 25 opponent, Jake Shields, via Twitter. 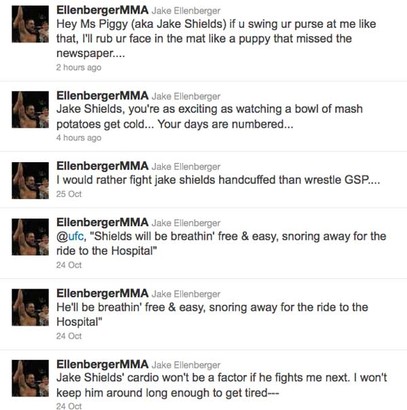 That's how this all works. Two years ago, Ellenberger was an unknown welterweight coming off a narrow split decision loss to Carlos Condit in his UFC debut. As time progressed, he showed signs that he was something to be taken seriously, grinding his way through a four fight win streak -- which included impressive three knockout victories -- all the while, positioning himself for the bright lights of legitimacy.

In this sport, for better or worse, two things expedite that process -- flashy results and public posturing. Even better if you have them both.

As Ellenberger's results came, unsurprisingly the posturing soon followed. But again, that's how this game works. He is simply an up-and-coming prospect trying to make a name for himself by riling up a more established name.

In that regard, Jake Shields' response to the constant barbs is rather surprising.

"I don't really know who the guy is," Shields told MMAjunkie.com com Radio (www.mmajunkie.com/radio). "That's my statement. I have no opinion of the guy yet. I guess I don't even know if I don't like him or not. I just hear he keeps talking crap. I don't know. I'm not sure why because I don't even know who he is."

In a sport characterized by an unheard-of level of unpredictability, the flippancy of this remark is somewhat alarming. Confidence is one thing, but complete disregard is an entirely different beast.

In no other athletic completion does an underestimation of one's opponents create such a dangerous scenario as MMA. Take the recent example of Strikeforce fighter K.J. Noons. The outspoken lightweight was set to face journeyman Jorge Masvidal in what was essentially a tune-up bout for an already agreed upon lightweight title shot. Leading into the fight, both Noons and Strikeforce oozed confidence that the future title bout would be fantastic, completely dismissing the most important step -- the present.

Well guess what? Masvidal went out and destroyed the expectations, battering Noons on route to a one-sided decision. Now it is Masvidal -- a fighter lacking the marketable name organizations rely upon -- that will face Gilbert Melendez for the lightweight title. Strikeforce and Noons played with fire and they got burned.

Whether Shield's comments were indeed true, or simply intended as biting sarcasm, the general nature of the mindset he is hinting at is rather worrisome. Ellenberger is not a pushover, in fact, some would say that he is quite capable of beating the former Strikeforce champion.

Dismissing your opponent before you ever enter the cage is a dangerous road to go down in the realm of combat sports. Once the lights are on, it only takes a split-second to turn that perception on its head. After all, they don't call it a "puncher's chance" for nothing.