Club America of Mexico City got its club on Sunday night at U of P Stadium, beating Morelia of el estado de Michoacan (MX) 3-1 before a crowd estimated at around 8,000 (it was never announced officially). The game was a preseason friendly between teams from one of the world's top pro leagues, La Primera Division de Mexico.
The game was labeled the Monsoon Classic, a match organized in part by a local club, the Phoenix Monsoon, to promote the team's inaugural season in the PASL Pro indoor soccer league this fall.
The crowd wasn't impressive -- there were more fans for a March 2011 game between the New York Red Bulls and Atlas, another Mexican club team. Habia mas aficionados para Club America, one of Mexico's most storied clubs, then for Morelia, un equipo del estado de Michoacan in Mexico nicknamed "Monarcas."
Un video para ustedes de los aficionados de Club America en desfile:
But those that came were vocal. The total attendance was likely affected by the Mexican under-17 men's team playing in the FIFA U-17 World Cup final around the same time as Club America-Morelia. 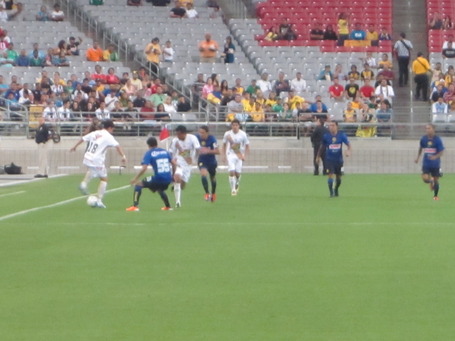 Morelia featured former Mexican national team forward Miguel Sabah, while America played American-born Edgar Castillo, one of only two players to earn caps for both Mexico and the U.S., at left midfielder.
Morelia anoto primero en el juego por sorpresa de muchos. Center back Joel Huiqui opened the scoring in the 23rd minute, knocking in a cross from midfielder Jaime Lozano to give Morelia, the 2011 Clausura (most recent) season runners-up in Mexico, a 1-0 lead. But America's Jose Martinez got a deflection on his shot that helped it into the goal in the 31st minute to tie it at 1.
Al medio tiempo el equipo Monsoon presentaron su plantel de la temporada primera. That is, the Monsoon introduced their inaugural roster to the crowd, hoping to pick up some interest and generate some ticket sales for the new team.
Daniel Montenegro fired in a wonder-strike (un golazo) from well beyond the top of the arc to give America the 2-1 lead in the 36th minute.
Morelia threatened en minuto 65, el disparo por delantero Luis Rey hitting the top of the goal.
Club America put away the match, to the delight of most, with a 74th-minute goal. Midfielder Miguel Layun slotted a pass through in the box to striker Daniel Marquez for the easy tap-in.
Dijo Castillo despues del juego (en ingles): "It was a good crowd, happy to be here," Castillo, a native of New Mexico, said. "We played good. We won, that's the good thing about that."