If you happened to let your bias against soccer, women's sports, or women's soccer keep you away from Sunday's World Cup quarterfinal match between Team USA and Brazil than you missed a classic. Your loss.

If you happened to see this game you were treated to a crazy own goal by Brazil in the opening seconds and an incredible equalizer by Abby Wambach in the closing seconds of stoppage time at the end of extra time which sent the game to the most agonizing ending to any sporting event, penalty kicks. Drama!

Penalty kicks are a crazy and somewhat controversial way to decide a game of this magnitude but there's really not much else you can do after 120 minutes of play. It's just fortunate that FIFA did away with the "golden goal" rule or Wambach wouldn't have even had a chance to once again use her powerful head to be the hero for the Americans. It's also fortunate that some horrible officiating didn't spoil the outcome.

Brazil has to be kicking themselves for the loss. They gave up a soft own goal early and weren't able to take advantage after going up a man after a red card sent off U.S. defender Rachel "The Buehldozer" Buehler for tackling Brazilian superstar Marta in the penalty box.

The U.S. were down a player for over 54 minutes and managed to control most of the play and matched Marta's brilliant goal early in extra time with Wambach's game-tying header off a fantastic cross from Megan Rapinoe.

Congratulations to the entire Team USA and special shout out to ASU's own Amy LePeilbet. LePeilbet and the entire American back line deserve a lot of credit for limiting the brilliant Brazilian attack.

Team USA now will face France in the World Cup semifinals on Wednesday.

Click here for a full recap of the game 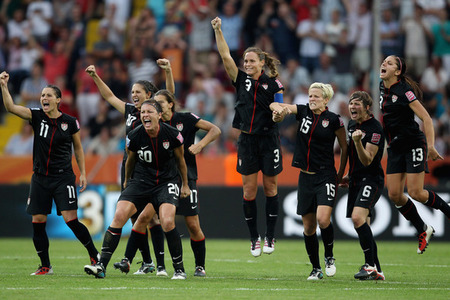 DRESDEN, GERMANY - JULY 10: The USA team celebrate during the penalty shoot out during the Women's World Cup Quarter Final match between Brazil and USA at Rudolf-Harbig Stadium on July 10, 2011 in Dresden, Germany. (Photo by Scott Heavey/Getty Images)