NBA Finals Schedule: Crucial Game 5 Set To Tip Off In Dallas, Which LeBron James Will Show Up?

Share All sharing options for: NBA Finals Schedule: Crucial Game 5 Set To Tip Off In Dallas, Which LeBron James Will Show Up?

One of the most exciting Finals in recent history has now become a best-of-three series. The Dallas Mavericks, carrying with them the hopes and dreams of a Miami Heat-hating nation, evened the 2011 NBA Finals up at two games a piece with yet another legendary fourth-quarter comeback, led by -- who else -- the incomparable Dirk Nowitzki. Despite Dwyane Wade's best efforts -- and he was spectacular, to be sure -- the Heat again sputtered down the stretch, coughing up a nine point lead late in the final period.

This time Dallas coach Rick Carlisle was the one making brilliant adjustments, inserting J.J. Barea into the starting lineup in place of DeShawn Stevenson, Brian Cardinal into the rotation instead of a listless Peja Stojakovic, and managing the Mavericks minutes so that a flu-ridden Dirk Nowitzki could maintain some level of freshness for the fourth quarter. Everything worked to perfection, and Dallas capped off another dramatic comeback with Nowitzki's driving layup with 14 seconds left on the clock.

Though, once again, the ensuing aftermath centered around the enigma that is LeBron James. Following another anemic performance -- in which the most gifted player in the game managed to score just eight points -- pundits everywhere reveled in the baffling behavior. Suddenly the man who brutally dominated Derrick Rose in the Eastern Conference Finals doesn't have the drive to be great when it matters. Doesn't have the heart to be a champion.

By now the story must be getting old for James, a two-time MVP, who's classic fallback of not having enough help around him is no longer a valid sentiment. Through four games in the 2011 NBA Finals, the young star's fourth quarter statistics read as follows: nine points, seven rebounds, six assists, five turnovers. Sooner or later, one would figure, the man they call "King" will channel that rage and unleash the unstoppable storm that everyone knows he is capable of.

"I think it's that time that I try to get myself going individually," James said, a tinge of defiance in his voice. Following Miami's latest collapse, the fire that has been lost from LeBron for so much of the series was music to Dwyane Wade's ears, as he hastily agreed, "Sounds good to me." 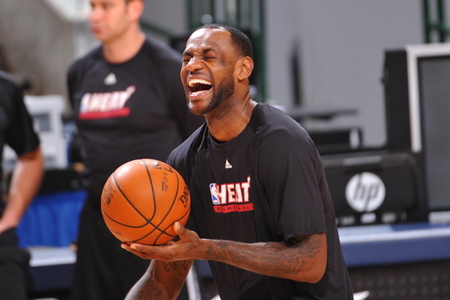