The 2011 NBA Finals have certainly been exciting with the Game 4 win by the Dallas Mavericks being right up there. Similar to Game 3 when the Miami Heat got the big bucket late, this time it was Dirk Nowitzki who put the ball on the floor and drove right for a layup with 14 seconds left. Dallas defense also deserves credit for holding LeBron James to just eight points on 3-11 shooting.

The Mavericks can withstand a great game from Dwyane Wade (32 points) when they are holding James and the Heat role players in check. The game was tight all through the fourth quarter but it was the Mavericks springing their zone defense at the right time that allowed them to get a few key stops. Jason Terry (17 points) and Shawn Marion (16 points) came through on a night when Dirk Nowtizki was battling illness and was held to 21 points on 6-19 shooting.

LeBron promised to be more aggressive in the next game and the Heat team in general should be better prepared for some of the wrinkles thrown at them by Dallas coach Rick Carlisle. The Mavericks are a great chemistry team and deserve a lot of credit stepping up and getting the win with their best player not at full strength. The challenge for those role players will be to avoid leaning to heavily on Dirk in the next game assuming he's healthy. 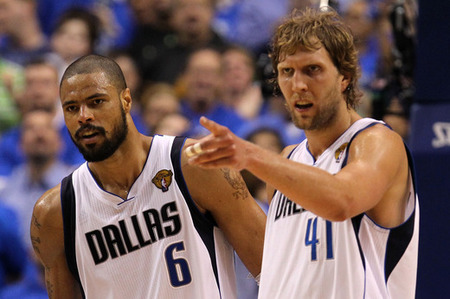 DALLAS, TX - JUNE 07: (L-R) Tyson Chandler #6, Dirk Nowitzki #41 and Jason Kidd #2 of the Dallas Mavericks look on against the Miami Heat in Game Four of the 2011 NBA Finals at American Airlines Center on June 7, 2011 in Dallas, Texas. (Photo by Ronald Martinez/Getty Images)