The Dallas Mavericks absolutely can't afford to lose Game 4 of the 2011 NBA Finals. The Miami Heat hold a 2-1 lead in the series and with a win Tuesday would be a virtual lock to win the Larry O'Brien Trophy. The task for the Mavericks is to solve the Heat defense and find a way to get some of their other scorers involved in the game and putting up points.

There's two ways to look at the series so far if you are a Dallas fan. On the one hand, the Mavericks won a road game and were very much in Game 3 and lost by just two points. On the other hand, all the breaks (and calls) went their way in that third game and they still lost. They won the rebounding (+6) and took 12 more free throws and still didn't win. The Heat have yet to get a big game from Chris Bosh and they essentially blew Game 2 with their own hubris after taking a big lead late in the fourth quarter.

What's pretty clear in watching this series is that the Heat have more talent on the floor at crunch time. LeBron James hasn't had to put up big shooting numbers because the Mavericks don't have anyone that can guard Dwyane Wade. James has been able to focus his efforts on the defensive end where he's shut down Jason Terry and at some point in this series, if needed, he's going to guard Dirk Nowitzki.

The Heat have lead the majority of this series so far and have yet to play a complete game. If they can bring the right mental focus to Game 4 (as they did in Game 3), they should be able to win Tuesday's game and essentially end the series. For Dallas to win, their shooters will need to find some other way to get open looks and hit them when they come. Most importantly, Dallas can't turnover the ball as they've done too many times in this series. 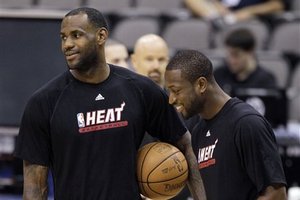 Miami Heat's Dwyane Wade and LeBron James, right, wait to shoot during a practice session for Game 4 of the NBA Finals basketball game Monday, June 6, 2011, in Dallas. The Heat lead the Dallas Mavericks 2-1 in the series. (AP Photo/Mark Humphrey)