Serena And Venus Williams Returning To Wimbledon In 2011

Share All sharing options for: Serena And Venus Williams Returning To Wimbledon In 2011

The 2011 Championships at Wimbledon got a huge boost with the announcement that both Serena and Venus Williams will be playing on the grass at the All England Lawn Tennis and Croquet Club this June. Both sisters are entered in the Eastbourne preliminary tournament which runs June 11 to 18. It will be the first time either Serena or Venus has played in many months.

Serena Williams was last seen on the court when she won the 2010 Wimbledon Championship. Shortly after, she stepped on a piece of glass in a restaurant in Germany that required two surgeries to repair. In early March she had an emergency procedure to remove a clot from her lungs.

"I am so excited to be healthy enough to compete again," Williams said in a statement released by her agent, Jill Smoller. "These past 12 months have been extremely tough and character building. I have so much to be grateful for. I'm thankful to my family, friends and fans for all their support. Serena's back!"

Venus Williams has been kept off the court with a hip injury suffered in January at the Australian Open. Venus was forced to retire during her third round match and hasn't played since. 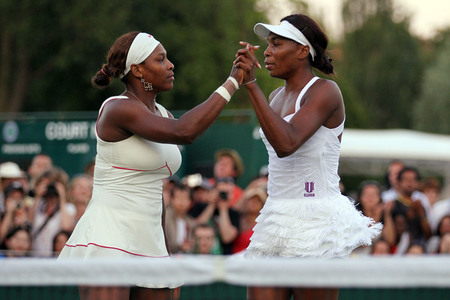 LONDON, ENGLAND - JUNE 22: Serena Williams and Venus Williams celebrate after match point after their first round doubles match against Julie Ditty of USA and Renata Voracova of Czech Republic on Day Two of the Wimbledon Lawn Tennis Championships at the All England Lawn Tennis and Croquet Club on June 22, 2010 in London, England. (Photo by Hamish Blair/Getty Images)

We'll be providing coverage of Wimbledon 2011 over the next few weeks. Check back in our Wimbledon 2011 StoryStream for news, analysis and other details. For more detailed conversation, join the folks at The Daily Forehand.