Roger Federer refused to go easily. After going down two sets in the 2011 French Open Finals, Federer battled back in the third set to push defending champion Rafael Nadal to a fourth set of fantastic tennis.

The two giants of men's tennis traded games early before Nadal got the first break to go up 4-2. Federer broke right back however, and the match continued at a fairly even pace. Then with the set tied 5-5, Federer got another huge break and went on to win the set 7-5. The score now stands at 7-6, 7-6, 5-7 with Nadal holding the advantage heading into the fourth set.

After committing 23 unforced errors in the second set, Federer cleaned up his game and finished the third set with just seven. Roger seemed to take a bit off his first serve in order to get more of them in which helped as well.

This fantastic match continues with a fourth set at Roland Garros.

The Nadal vs. Federer match started at 9:00 a.m. ET / 6:00 a.m. PT and is broadcast live on NBC TV in HD and is streaming live online at NBCSports.com. 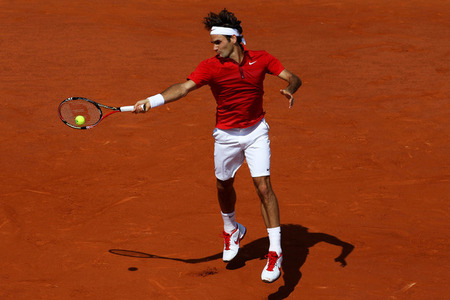