The history of these two great players continued on form with Rafael Nadal once more beating Roger Federer to win the 2011 French Open title. Nadal has now tied Björn Borg with six wins, the most in the open era. At just 25, Rafa has plenty of years ahead of him to solidify his place as the greatest clay court player of all time. Nadal beat Federer 7-5, 7-6, 5-7, 6-1 in a great match between these two warriors.

It was a solid showing from Federer who opened the 2011 Finals with an early break and a 5-2 lead but Nadal rallied right back and took control from there. In the second set it was Nadal who broke Federer early but this time Roger came back to force a tiebreak. In the most crucial part of the match, Nadal stepped up and showed his dominance.

The third set was an evenly played back-and-forth affair with each player holding serve early and then trading breaks in the middle part of the frame. Late in the set tied 5-5, Federer took control with a crucial break and won the set, 7-5.

In the fourth and final set it was Nadal's clean play and grinding defensive style that eventually wore down Federer. The key moment was Nadal's break of Federer's serve at 2-1. Rafa broke Roger again late and closed out the match 6-1.

The 2011 French Open Men's Final was a fantastic battle between these two greats of the game. Federer gave it all he had and certainly goes into 2011 Wimbledon as a favorite on the grass surface that's much more friendly to his game. But on the clay, there's no doubt that Nadal is king. 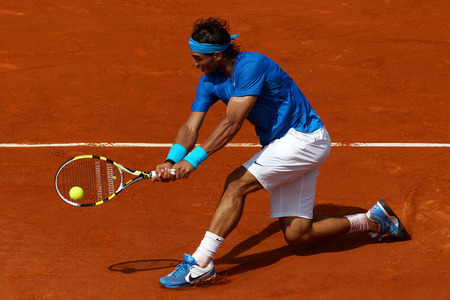