The Finals of the 2011 French Open took yet another funny bounce when a brief rain delay seemed to stop Rafael Nadal's roll to a second-set victory and allowed Roger Federer to break at 4-5 and force a tiebreak. Nadal was able to regroup and win the tiebreak and now takes a big 2-0 lead into the third set.

The normally unflappable Roger Federer turns into another man when he's across the net from the beastly Rafael Nadal. After giving up a 5-2 lead in the first set by dropping the next five games, Federer's low spirit carried over into the second. Nadal smelled blood on the court and pounced immediately, breaking Roger in the first game. Nadal won seven-straight games carrying over from the first set before Roger finally held.

Federer battled back and broke Nadal to tie the score at 4-4. It was his first break against Nadal since early in the opening set. But Nadal came right back on Roger's next service game and stole any advantage and hope that Federer created. Rafa's defense and spin have been the keys to his game on the clay at Roland Garros as it's been for so many years.

A brief and sudden rain suspended play with Nadal up 5-4 at deuce, just two points from winning the set. The delay seemed to rattle Rafa and Federer came back on the court and got the break which eventually forced the tiebreak. By that point Nadal had gathered himself and went up 4-0 in the tiebreak before winning 7-3 to take a two-set lead.

The Nadal vs. Federer match started at 9:00 a.m. ET / 6:00 a.m. PT and is broadcast live on NBC TV in HD and will be streaming live online at NBCSports.com. 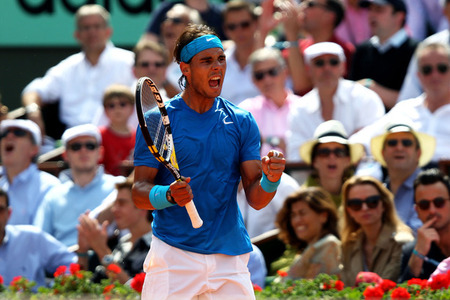 PARIS, FRANCE - JUNE 05: Rafael Nadal of Spain celebrates a break point during the men's singles final match between Rafael Nadal of Spain and Roger Federer of Switzerland on day fifteen of the French Open at Roland Garros on June 5, 2011 in Paris, France. (Photo by Clive Brunskill/Getty Images)