Jose Benavidez Jr. was a wild child, always getting into something. He was a handful and admitted he gave his parents headaches. So they got him into all kinds of sports. One of those was boxing.

It turned out to be the perfect fit. Thirteen years after putting on the gloves for the first time, Benavidez is already quite an accomplished fighter. He's the youngest Golden Gloves champion in U.S. history (age 16), sparred with Manny Pacquiao and Amir Khan and trained with Freddie Roach and enters next Saturday's bout at Wildhorse Pass Casino in Chandler with an 11-0 record as a pro. Ten of those wins have come by knockout after he turned pro at 17 years old.

Not bad for a southpaw from southwest Phoenix who just turned 19. Benavidez has as bright a future as there is in the sport and hopes to win multiple championships.

Lanky and lean at six feet tall and currently fighting at light welterweight, he'll almost certainly have a reach advantage and will look to throw his jab as often as possible. Benavidez admits he doesn't know who he is fighting on the 11th, and he prefers to keep it that way.

"I'm taller and I have longer arms," he said. "That's the key to everything, the reach advantage."

The fight means a lot to Benavidez. He was scheduled for a bout last July in Phoenix until the sudden passage of SB 1070. Mexican-based sponsors pulled out because of the expected ramifications of the anti-illegal immigration law. Benavidez, who with his corner men planned to wear ring apparel for the fight in protest of the law, quickly lost the desire to fight.

"I was ready to fight, but then all this stuff started happening. It kind of bummed me out a little bit," said Benavidez, whose father was born in Mexico. "I didn't want want to fight because I wasn't for that law. Not that many people were even able to go. A lot of people were actually scared to get out of their house and stuff, so why try to fight someone when people are going to be scared and not be comfortable to go watch the fight?"

About a year later, the law has not had the effect originally intended, some of its provisions blocked from being enforced by federal courts. Finally, Benavidez' homecoming bout can happen.

It figures to be a grand affair, with several fights on the undercard and Bob Arum's Top Rank promotions representing Benavidez.

"Just getting the chance to fight at home, it's exciting. And not only that, there's going to be a lot good guys on the card," Benavidez said.

Benavidez, born in the Los Angeles area but a Phoenix resident since age 2, is being trained by his father Jose Sr. at the Central United Boxing Club near 18th Ave. and Van Buren Street. The outer walls of the cramped but storied gym feature paintings of many big-name fighters who have trained inside. Benavidez is one of the newer additions to the wall, his image adjacent to that of another local legend, Michael Carbajal, and captioned by the words "AZ's Youngest Gold Glo(ves Champ)." 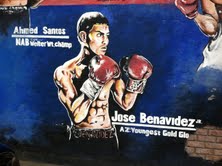 Benavidez has yet to make a lot of money in the fight game, but he's already fought at some big-time venues, including the MGM Grand in Las Vegas and mammoth Cowboys Stadium, where he fought on the Pacquiao-Antonio Margarito undercard.

"When I fought at the Cowboys Stadium I was actually the fourth or fifth fight, and by that time there was already 40,000 people watching. When I was walking out with all those people cheering, words can't explain the feeling I got," Benavidez said. "It was crazy man, it  was really intense."

There have been comparisons made to other fighters. A painting on the gym wall of his likeness at age 16. Competition from other top promoters to represent Benavidez, which his father navigated through with patience. His decision not to pursue a place on the U.S. Olympic team because "it's just too many politics. They already have their chosen ones."

Through it all, Benavidez and his father pledge to keep the fighter humble and connected to his local roots. It shows. Benavidez has visited with kids at Phoenix Children's hospital. He greets every fighter that walks into the locker room with a fist pound. He works out on the same speed bags, heavy bags and in the same rings as the other novice fighters, hopefuls and those just there to stay in shape.

"I've been training here (at Central) since I was 11, 12 years old," Benavidez (wearing black shirt in photo below) said. "It's just my home. I just feel comfortable here. I know everyone here." 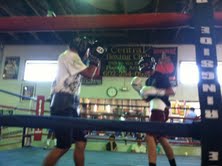 "We're not rushing. We're just taking our time to get better and better, and when the time comes and we have the opportunity to fight for a title, he'll be ready," the elder Benavidez said. "I wish for him to make a name for himself one day."

Benavidez watches film of old fights and calls Oscar de la Hoya, Julio Cesar Chavez and Prince Naseem Hamed his favorite pugilists. He wakes up at 5 a.m. for workouts, which includes runs up South Mountain, and with his father continues to not only work but also learn more about boxing every day.

It seems like all Benavidez needs is a nickname. He's open to any good suggestions.

"It's hard work but it's the sport I love," Benavidez said. "My main goal is to be a world champion. Ever since I was little that's what my dream has been... Hopefully one day I'll be a world champion and bring a belt back home to Phoenix, Arizona."