It's finally here, again. Rafael Nadal and Roger Federer in the finals of the 2011 French Open. Nadal is a heavily favored based on his extensive history of winning at Roland Garros and beating Federer. Nadal will be going for his sixth title on the Paris clay courts while Federer will be looking for his second win and first-even victory over Nadal at the French Open.

The Nadal vs. Federer match starts at 9:00 a.m. ET / 6:00 a.m. PT and will broadcast live on NBC TV in HD and will be streaming live online at NBCSports.com.

Given the head-to-head dominance Nadal holds over Federer and Rafa's love of this surface, we would expect the odds makers to have Rafa as the favorite in the betting lines and they do. Nadal is -250 while Federer is a +180. With those odds a $10 bet on Nadal to win earns you $4 while a $10 bet on Federer nets you $18.

It's hard to bet against Rafael Nadal on the clay courts of the French Open. He's so comfortable sliding around and using his defense to wear down opponents and force them into mistakes. Roger Federer has struggled mightily against Nadal on clay with a game record of 48-79 in their last five clay court matches.

Federer, however, has played great at the 2011 French Open and his impressive four-set win over Novak Djokovic showed he still have a lot left in the tank. Roger's serve has been pin point accurate and he controls a point and understands the game as well as anyone, anywhere.

While I will be rooting for a Federer upset, it's impossible to go against history: Nadal in four sets. 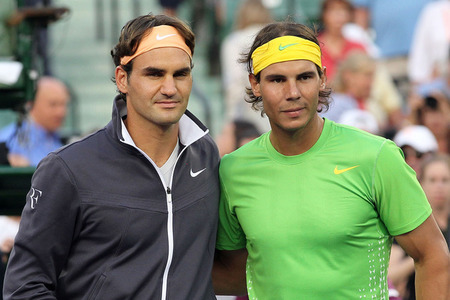 KEY BISCAYNE, FL - APRIL 01: (L-R) Roger Federer of Switzerland and Rafael Nadal of Spain pose for a photo at the net prior to their men's semifinal match during the Sony Ericsson Open at Crandon Park Tennis Center on April 1, 2011 in Key Biscayne, Florida. (Photo by Al Bello/Getty Images)