Li Na delivered the first French Open title for China by defeating the defending champ Francesca Schiavone in straight sets. It was a close enough match with a final score of 6-6, 7-6 with the difference being Li's high serve percentage and more aggressive style. Schiavone's clay court defense and movement advantage wasn't enough to win her a second consecutive French Open.

Na completed 77 percent of her first serves compared to 63 percent for her Italian opponents and had a 69-to-50 percent advantage on second serve points won. Li Na had 24 unforced errors compared to 17 for Francesca Schiavone but also had 31 winners compared to just 12. Neither lady approached net much but Na was more efficient when she did, converting 10-12 chances compared to 6-13.

The 2011 French Open wraps up on Sunday with another classic meeting between the King of Clay, Rafael Nadal and Swiss Machine, Roger Federer. The match starts a 9:00 a.m. ET / 6:00 a.m. PT on NBC TV and streaming live online at NBCSports.com. 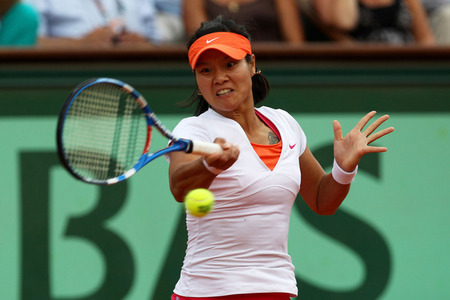 PARIS, FRANCE - JUNE 04: Na Li of China hits a forehand during the women's singles final match between Francesca Schiavone of Italy and Na Li of China on day fourteen of the French Open at Roland Garros on June 4, 2011 in Paris, France. (Photo by Alex Livesey/Getty Images)