The fourth set between Novak Djokovic and Roger Federer at the 2011 French Open lived up to and even exceeded the hype. With both of these tennis warriors on top of their games we were treated to a great display of tennis genius. Federer's serve was pin-point accurate and Djokovic used his mobility and strength to make shots from all over the court. In the end, it was an ace from Roger Federer that won the match in tiebreak with the final score, 7-5, 6-3, 3-6, 7-6.

At four-all, Djokovic got a huge break to take control of the set but Federer came right back and broke Novak's serve to tie the set 5-5 as darkness closed in. In longer points it seemed Djokovic was able to out-muscle the older Federer but every time he needed a big point, Roger was able to hit a line with his serve or pull out a defensive gem.

Fittingly, this fantastic set came down to a tiebreak. Both men rose to the occasion but it was the amazing Roger Federer who was able to find that extra gear as he's done so many times in the past and win the tiebreak, 7-5. With a match on the line, there's no one better than Roger as he served up his 18th ace of the match to get the win.

Federer will face Rafael Nadal on Sunday in the Finals of the 2011 French Open in what promises to be another classic duel between those two rivals. That match starts Sunday at 9:00 a.m. ET / 6:00 a.m. PT on NBC TV with live streaming online at NBCSports.com. 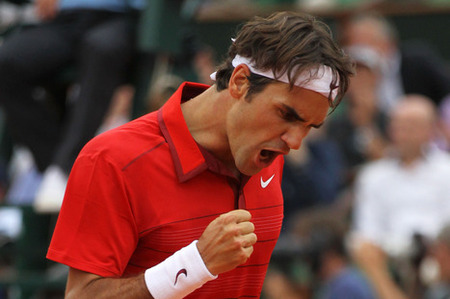