Share All sharing options for: French Open Results: Nadal Rolls Murray; Federer And Djokovic Up Next

Rafael Nadal survived a bothersome wind and a tough opponent to advance again to the Finals of the 2011 French Open. Nadal beat Andy Murray in straight sets (6-4, 7-5, 6-4) to set up a finals meeting against either Novak Djokovic or Roger Federer who play their Semi Finals match immediate following Nadal and Murray. Rafa is the 2010 French Open winner and in his brilliant clay court career has won five titles at Roland Garros and now goes for six on Sunday.

Nadal and Murray exchanged breaks through the first two sets as both men had trouble with the wind but it was Nadal's defensive patience that forced Murray into many unforced errors. The Brit was continually forced into mistakes as he tried to end points with overcooked shots. He had 40 unforced errors compared to 30 winners. Nadal also took better advantage of break opportunities going 6-13 (46%) compared to 3-18 (17%) for Murray. Nadal is now 11-5 in head-to-head battles with Murray.

Roger Federer and Novak Djokovic are next up with their 2011 French Open Semi Finals match that will hopefully produce a bit more drama. That match is streaming live online at NBCSports.com and will be broadcast on NBC TV at 11:00 a.m. in all time zones. If you are on the east coast of the United States you can watch live on TV, otherwise the match will be delayed. 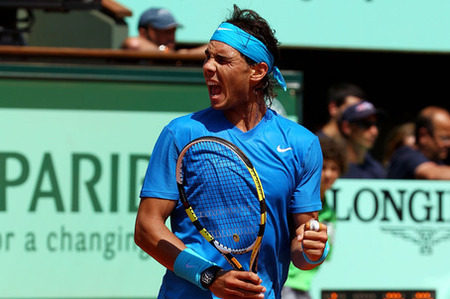 PARIS, FRANCE - JUNE 03: Rafael Nadal of Spain celebrates a point during the men's singles semi final match between Rafael Nadal of Spain and Andy Murray of Great Britain on day thirteen of the French Open at Roland Garros on June 3, 2011 in Paris, France. (Photo by Clive Brunskill/Getty Images)