With 7:14 left in Game 2 of the 2011 NBA Finals, Dwyane Wade hit a three-point shot that put the Miami Heat up 88-73 over the Dallas Mavericks. At that point everyone thought the game was over, including the LeBron James and Wade who celebrated wildly right in front of the Mavericks bench. Unfortunately for the Heat, Dallas didn't think the game was over and used their anger at being disrespected and Miami's own hubris to climb back in the game and tie the series 1-1. The next three games will be in Dallas with Game 3 on Sunday, June 5 at 8:00 p.m. ET / 5:00 p.m. PT.

Dallas outscored Miami 22-5 in those final seven minutes as they raised their game to another level and simply overwhelmed the Heat with their energy and will. It's fitting in so many ways for the more talented Heat team to be done in by their own arrogance.

Wade insisted the celebration in front of the Mavericks bench after hit the three-point shot to put Miami up 15 was perfectly fine.

"There was no celebration. It was a shot made going into a timeout. Every team does something. That's the game. If it pumped them up -- they won the game. Obviously it did something. That's not the first time. It won't be the last time that -- if we do a great play that we come and our teammates and we do something," Wade said.

Miami should be able to learn a lesson from this and dominate the rest of the series but if Dallas' confidence is able to carryover and win them the NBA Finals it will be the fourth quarter of Game 2 that was the turning point. Up to that point, the Heat were dominating the Mavericks with their defense and athleticism which produced 30 points off 20 Dallas turnovers.

Here's the full remaining schedule for the 2011 NBA Finals. 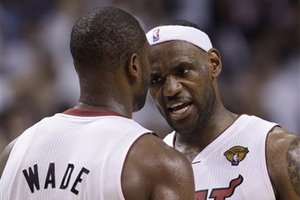 Miami Heat's LeBron James (6) speaks with Dwyane Wade during the second half of Game 2 of the NBA Finals basketball game against the Dallas Mavericks, Thursday, June 2, 2011, in Miami. The Mavericks defeated the Heat 95-93. (AP Photo/David J. Phillip)