The Semi Finals for the 2011 French Open feature the top four names in men's tennis. Rafael Nadal (Spain) will face Andy Murray (Great Britain) in the first match followed by Novak Djokovic (Serbia) against Roger Federer (Switzerland) in the second. These are clearly the top players in the game and should hopefully provide some exciting action.

The 2011 French Open Men's Semi Finals will be broadcast on TV on the Tennis Channel who will also host live streaming online at tennischannel.com. The action begins at 8:00 a.m. ET / 5:00 a.m. PT with Nadal vs. Murray which will be followed by Djokovic vs. Federer which will be on NBC and with live streaming at NBCSports.com starting at 11:00 a.m. ET and tape delayed for an 11:00 a.m. showing everywhere else in the country.

That first match is a bit early but by the time it's over you can hopefully pull the match up on your computer and watch what should be an explosive meeting. 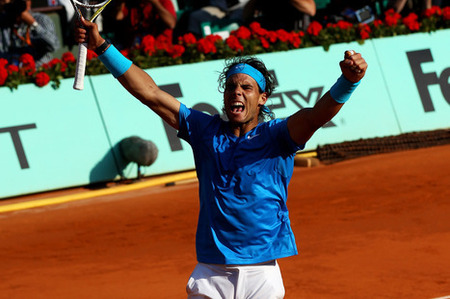 PARIS, FRANCE - JUNE 01: Rafael Nadal of Spain celebrates matchpoint during the men's singles quarterfinal match between Rafael Nadal of Spain and Robin Soderling of Sweden on day eleven of the French Open at Roland Garros on June 1, 2011 in Paris, France. (Photo by Alex Livesey/Getty Images)